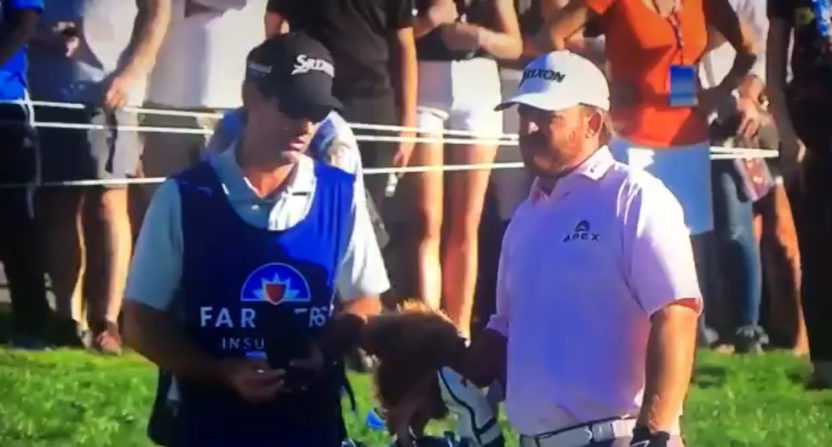 Pace-of-play regularly becomes a discussion in golf, but the examples of slow play are rarely as obvious as what J.B. Holmes did on the final regulation hole of the Farmers Insurance Open at Torrey Pines Sunday, earning criticism from both other golfers and commentators.

Needing an eagle on 18 to get into the playoff against Jason Day (who had already finished) and possibly Alex Noren (who was waiting to play), the notoriously slow Holmes stood there over his shot for almost four minutes, changing clubs and possibly hoping the wind would die down.

CBS commentators Jim Nantz and Nick Faldo roasted him, even referencing the network’s need to get to Grammy Red Carpet Live (which they eventually threw to before the playoff, 38 minutes behind schedule). Here’s the clip:

Video of J.B. Holmes and his caddie trying to wait out the wind. Eventually lays up into the rough ? pic.twitter.com/KaYQpShfeE

That starts with Holmes’ caddie (Brandon Parsons) saying to him “You just got to wait, you gotta be patient” and Nantz chiming in “We’re being patient, don’t worry about that.” Faldo then says “Wait and be patient? They’re holding everybody up on the red carpet. I can’t believe it.” Nantz says “No kidding. All those stars, circling around the block in their limos,” and Faldo chips in “Just do another lap, please, Jay-Z, Beyonce?”

On-course reporter Dottie Pepper then asks “At some point, Nick, don’t you have to just make a decision and go with it?” and Faldo responds “You’ve got to see the shot, but technically, you’re not meant to be doing this. Oh.” (Technically Faldo is right, there’s a rarely-enforced 45-second rule.) Pepper says “The crowd is really starting to get on him,” and some of that can be heard in the background. Faldo then says “He really needs an eagle, it makes sense to be at worst over the green then,” Nantz says “At some point, you’ve got to hit the shot,” and Faldo says “You’ve got to get in there.”

Nantz then mentions “This group is on pace for somewhere right around six hours,” and Faldo says “Really? Wow.” Pepper says “The fans up around the green are really getting agitated,” and Nantz says “And there is a huge throng here, certainly this area, right around the 18th. I’m not sure I’ve ever seen anything quite like this.”

Faldo responds “I’m amazed, to be honest. This is the shot clock and all that sort of thing. And Alex [Noren, as the feed cuts to shots of him taking practice swings while waiting] has made his mind up, he’s just trying to stare it down, paint one picture and stick with that picture. So [as it goes back to Holmes, addressing the ball with an iron], he didn’t think he could get there, three wood probably too much, five wood not enough, so he’ll just knock it down and try and hope for third.”

As Holmes finally hits the shot, which isn’t great and lands in the rough, Pepper says “That ball needs to get down too. After all that…” and Nantz replies, “Yes, after all that.”

That’s a pretty rare and thorough roasting of a player from the broadcasters, and they weren’t the only ones upset with Holmes. By the way, he finished with a birdie and missed the playoff. Noren made it despite all that, taking only 26 seconds to hit his own shot on 18 after the Holmes drama. (He’d eventually fall to Day on the sixth playoff hole Monday. Ryan Palmer originally made the playoff too, but was eliminated after one hole.)

After five holes Sunday, the playoff was continued until Monday in front of empty crowds because of darkness, so slow play may have had an effect on when the tournament finished.

A few pros chimed in about Holmes’ play on 18 and wondered why Tour officials didn’t penalize him:

Last group was over a hole behind, we can all blame JB…and yes the player should take responsibility for their pace of play, but if they don’t that’s why we have Tour officials – they needed to step in a while ago IMO.

1. JB needs to be fined or better yet given 2 shots
2 Needs eagle to tie. After all that lays up? Really???
3 Horrendous sportsmanship to Noren and Palmer
4 wow ?

And a whole lot of golf media and fans went after Holmes too, not just for the four-minute shot but also for his entire day of play:

I get that Torrey is tough, but Rory and Haotong could have played Dubai twice, driven over to Abu Dhabi and played there, too, and J.B. Holmes and friends would still be somewhere on the back nine.

JB Holmes about to single handedly usher in the shot clock era to the PGA.

JB Holmes just took fourteen hours to hit the worst layup I have ever seen.

"You've just got to wait and be patient" JB Holmes caddie. What nonsense. Penalize him. Six hour round!

That performance by JB Holmes and his caddy on that second shot was one of the weakest, most bizarre things I've seen in a PGA Event in a while. And it was totally unfair to Noren. #FarmersInsuranceOpen

JB Holmes with one of the most egregious 72nd-hole icings that I can remember.

Asked JB Holmes if he regretted taking so much time to play his second shot on 18, while icing Alex Noren: “No, I was still trying to win. So that’s part of it.”

(Trying to win by laying up despite trailing the clubhouse leader by 2 shots?)

But this definitely brought Holmes a whole lot of criticism. And it might give the pace-of-play conversation a boost.