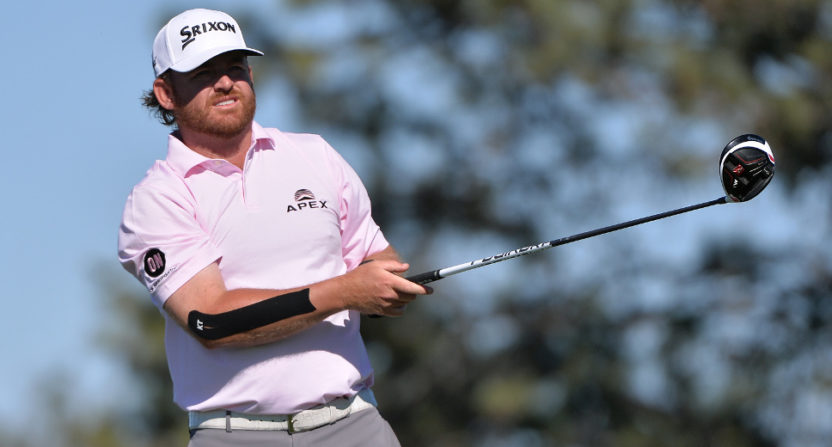 The end of Sunday’s Farmers Insurance Open at Torrey Pines saw some controversy, thanks to a particular moment from J.B. Holmes on the 18th hole. Holmes took around four minutes to hit a shot, leaving playing partner Alex Noren waiting.

That drew significant criticism from CBS commentators Jim Nantz, Nick Faldo and Dottie Pepper, as well as many other PGA Tour pros, golf journalists and fans. However, when speaking to Golf Channel’s Tim Rosaforte Monday, Holmes partly apologized, but also said he didn’t understand why there was so much criticism:

“I didn’t realize how long it was taking,” he said. “We (Holmes and caddie Brendan Parsons) were just trying to make the best decision to play.”

In other words, Holmes was waiting for the gusts to die down, so he could take the head cover off a 5-wood he didn’t trust, and play a shot to the green. Ultimately, he hit a poor wedge shot and made par to finish fourth.

“If it bothered Alex, he could have said something and he could have hit,” Holmes said. “If I messed him up, I apologize. He still made a good swing. He smoked it. (Hitting 3-wood over the green and through the tunnel, next to the CBS booth.) I don’t understand what the big hoopla is all about. I was just trying to give myself the best chance to win the tournament. I didn’t want to mess anybody up.”

…Holmes, who had a reputation for being a slow player, feels like he’s changed that habit, and doesn’t want to be incriminated.

“I used to be slow. I’d agree with that,” he said. “But it’s been years and I’m not slow any more. I don’t get timed more than anybody else.”

As noted in Rosaforte’s piece, a significant part of the issue and the criticism isn’t just of Holmes, but rather of the PGA Tour officials for not telling him to speed up. And it’s not entirely fair to say that his group’s six-hour time Sunday was evidence of him being slow, as they were often waiting for the group in front of them.

But at the same time, the criticism of Holmes has some merit, and the “big hoopla” here isn’t really misplaced. Taking four minutes to hit this shot not only looked like an attempt to game the conditions, but also put an unfortunate amount of pressure on Noren (who was ready to hit his shot long before Holmes hit his). And this was part of what led to the eventual playoff between Noren, Jason Day and Ryan Palmer (who was eliminated after the first playoff hole) dragging into Monday (where Day won on the sixth hole); it was called after five holes Sunday on account of darkness.

Even a faster shot from Holmes in this particular circumstance might not have changed that decision and let the players finish Sunday, but slow shots in general definitely were a factor.

There’s more of an impact here than just for the players, too. This was disappointing for the fans on-course (who jeered) and for those watching on TV, and it was particularly frustrating for CBS, which was trying to get to the Grammy Red Carpet Live pre-show they were already late for. Even with their decision to throw the broadcast to Golf Channel for the eventual playoff, they still only made 22 minutes of that hour-long show, and took a ratings hit and probably a financial hit as a result.

Holmes’ four-minute shot certainly wasn’t the only culprit in golf’s 38-minute overrun, but it was part of the problem. And it’s going to be cited for time immemorial in any further golf pace-of-play debates. So there is a “big hoopla” here, whether Holmes sees it or not.