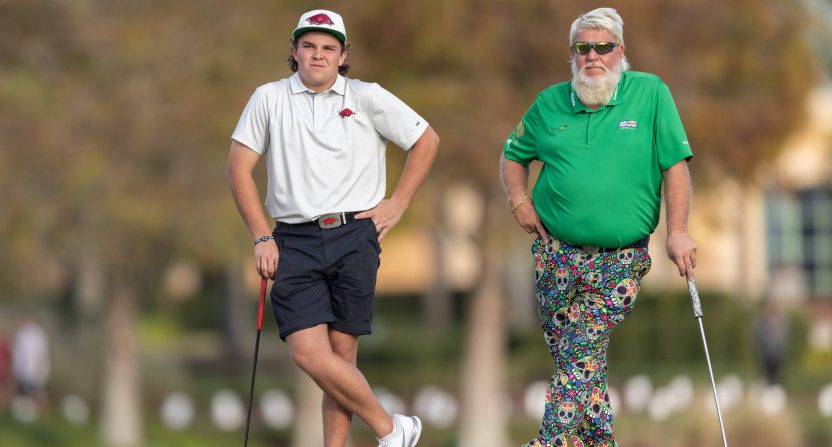 NIL has changed the landscape of college athletics in a short amount of time. We’ve seen women’s athletes benefit greatly from it. We’ve seen football powerhouses form foundations around giving money to athletes and potentially luring recruits. We’ve certainly seen lots of coaches speak out about the dangers of it (while raking in millions themselves).

But here’s something we haven’t seen before. A father-son duo NIL deal. It was perhaps destined that the wacky side of NIL deals would feature an appearance by golfer John Daly, whose son, John Daly II, has signed with Hooters, a brand that his father already represents.

John Daly II plays golf for the Arkansas Razorbacks (where his dad has made an impression) and has, so far, only played in one tournament, posting 83-68-78 at the Blessings Collegiate Invitational in October. But that’s less important to the drawing power of his name and dad, a longtime PGA golfer and very interesting person.

Can’t express how excited I am to be back with my @Hooters family & having my son beside me on the next generation! Couldn’t ask for a better relationship & proud to represent the world wide brand! 🦉👊🏼 #Hooters #orangewhite #NIL #FatherSon #Family pic.twitter.com/yeajNCqPEM

Hooters has signed father-son duo John Daly and John Daly II in its first NIL agreement for a college athlete. The Dalys will promote the world-famous @Hooters brand through various marketing activities, including significant roles on social media and other digital channels. pic.twitter.com/gN2SKOP0KX

As far as what the NIL entails, the Dalys will promote the chicken wing restaurant “through various marketing activities, including significant roles on social media and other digital channels.” In other words, it will probably be a lot of appearances and photo ops.

Here’s the thing. You can’t just post a photo of John Daly, wearing Hooters-themed golf pants, standing with his son and two Hooters spokesmodel, and not expect some interesting reactions around social media.

John C Reilly is gonna play the hell out of John Daly in some movie some day. https://t.co/lomPoMgoyr

Can't wait to get a John Daly cocktail at Hooters https://t.co/9cU5q8pMmq

Lol. If you go to Augusta on Masters week there is only ONE bus sitting outside of Hooters all week and that is John Daly’s. This makes complete sense actually. https://t.co/wSjmPCNXp7