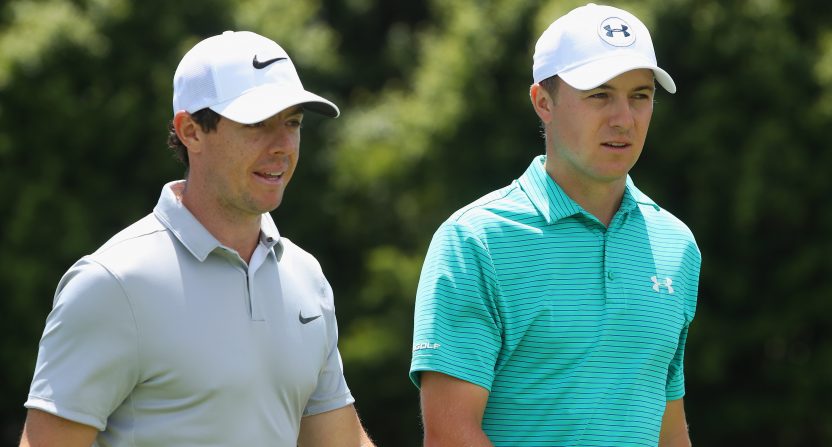 Golf is too focused on the majors. That’s an odd lede for a post that only exists to preview the Masters, but it’s still true. Four times a year, every player has a shot at winning a tournament that matters.

The other tournaments matter too, of course, but for too large a portion of golf analysts, they don’t matter as much. If a player were to win twenty times in a year,  but didn’t win a major, there would be multiple people questioning whether or not he actually had a good year, and why he couldn’t get it done when it counted.

So, as the Masters tees off tomorrow (weather-permitting; Wednesday’s Par 3 contest was already washed out), it’s worth remembering that there are a lot of good players, and only four potential major winners each season. The standards are too high, when you consider how small a sample size that really is.

It leads to really dumb narratives that can be easily debunked. So let’s tackle the biggest of those, featuring two of golf’s biggest and youngest stars, and then get to who will win.

Why can’t Rory get it done at Augusta?

Rory McIlroy hasn’t won the Masters yet. He’s also won the other three majors at least once. This leads to people questioning why Rory hasn’t completed the career grand slam when he’s still just 27, despite only five other golfers ever having done it.

It’s not like he hasn’t played well at Augusta. McIlroy hasn’t finished outside the top 10 since 2013, but he hasn’t won, and many can’t get over the memory of Rory’s 2011 Sunday collapse. Of course, McIlroy himself seemed to get over it fine, winning the 2011 U.S. Open, but there are still plenty of people ready to pounce when and if he doesn’t win at Augusta.

Or at any major; some people have already said Rory is in a major drought, as he hasn’t won since the 2014 PGA Championship. As if there aren’t more great players (and more really good players) than ever before. Rory might not win this week, but the smart money would be on him winning at Augusta at some point in time. He’s just too damn good.

Will Jordan Spieth be haunted by his 2016 collapse?

Another classic, this has bled over into non-major tournament analysis as well:

Nick Faldo is saying Jordan Spieth is 2 down in his match today because he's distracted by a return to #12 at the Masters. It's insufferable

If you’ve somehow forgotten, Spieth made an eight last year at the par 3 twelfth hole on Sunday, costing himself what had seemed a surefire second-straight Masters. It’s reasonable to think it must be somewhere in his mind; at the time, I wrote this:

Next year, or the year after, or five years on, Spieth will be standing on the 12th tee, on Sunday, staring down the exact same tucked pin on the hole that has effectively taken two green jackets away from him already. Will he be able to fully block that out, or will it remain just to the side of his thoughts, lingering enough to cause him to doubt himself to the point of another mistake?

Could you block that out?

And Spieth himself has hinted that he’s played it again in the interim:

@jayrigdon5 Spieth revealed he'd birdied it twice on a trip to Augusta earlier this year in an exclusive interview in our current issue.

But I never would have suggested it’s going to have an effect to the degree that some people have suggested. It’s more than a little ridiculous. Jordan Spieth has played the Masters three times. He’s won once and finished T2 twice. That’s insane! There’s something about the course that fits him, and it’s hard to fathom a scenario in which he isn’t at least on the weekend leaderboard.

If he has an identical meltdown on 12, then sure, bring on the narratives. But if he just puts it into the middle of the green and two putts, that should be the end of it for good.

So who’s going to win?

You might expect this to be a prediction of either Spieth or McIlroy, seeing as how the entire first sections of the preview were focused on them. And obviously either of them could win; golf predictions are such an impossibility. (I once guessed Darren Clarke would win the British, and I was as shocked as anyone when it happened.)

And if Spieth or McIlroy don’t win, it’s not a referendum on their Augusta narratives, although it will likely continue to perpetuate that unfortunate cycle going forward. There are a few other names to consider, as well, and if forced to pick six guys from which a winner will emerge, I’d have Spieth, Rory, and these four names.

In no particular order:

Dustin Johnson
DJ has won three straight starts, has a perfect game and mentality for Augusta, and has played well previously. A very sound pick for the week.
Phil Mickelson
Phil loves Augusta, is always more motivated here, and has actually been playing some great golf for a while now, despite not having won since his British Open victory in 2013.
Ryan Moore
There’s always a random popup guy on the leaderboard. Might as well be Ryan, who’s played some good-to-very good golf of late, and has a decent history of contending.
Jon Rahm
Why not? Dude’s on fire, makes a ton of birdies, and doesn’t seem scared of any moment.

Will the winner be one of those six guys? No one knows! But if you’re building a DFS team or looking to win a pool, those are the players I’d lean towards.