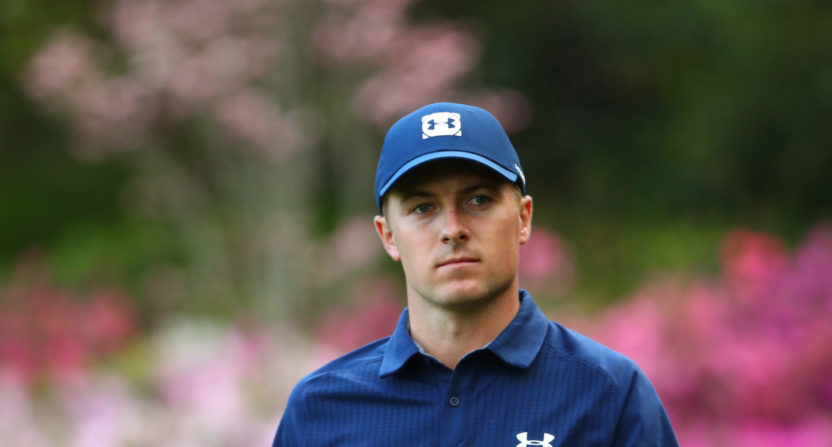 The opening round of the Masters saw plenty of highlights, and a few lowlights. Many on one hole, thanks to defending champion Sergio Garcia’s Tin Cup-style meltdown, hitting five straight shots into the water on the 15th hole.

But plenty of the highlights were provided by Jordan Spieth, who lit up the back nine en route to an opening 66. That puts him at -6, two shots clear of Matt Kuchar and Tony Finau, who somehow shot 68 despite basically dislocating his ankle yesterday.

You can watch the entire round in under 3 minutes, if you like:

Spieth’s round wasn’t off to a terrific start as he played the eighth hole; he was even after two birdies and two bogeys. And after he hit his approach into the par 5, Spieth still wasn’t thrilled. He got a hell of a bounce, though:

That eagle put Spieth at -2, and after a string of pars from 9-12, he took off on a ridiculous hot streak.

Here’s Spieth not laying up on 13 (direct conflict with his AT&T commercial in which he advises laying up in multiple situations) and being rewarded for it:

And then on 14, which is not traditionally a birdie hole:

He threw in a birdie on 17 for good measure, before coming ever so slightly back to earth with a bogey on 18, although it was actually a hell of a bogey given where he drove it. His run saw him go 7-under in 10 holes, a run that’s going to move anyone up any leaderboard, and this was no exception. Spieth’s presence at the top of the opening round leaderboard is also not an exception. It’s pretty much the rule, at this point: Spieth’s played in five Masters, and he’s led after the first round three times.

That’s ridiculous. And it’s not just the opening round, either:

Spieth's position on the leaderboard at the Masters after his 17 rounds here.

Spieth pretty clearly has another gear that he either brings out for Augusta or that Augusta brings out for him. His ball-striking and short game are never more useful, and he’s seemed to have an innate sense of how to manage the course, wisdom that’s more valuable there than anywhere else. (Which is how Fred Couples is once again under par.) Spieth didn’t need decades to pick it up, though, and that’s why he’s had multiple opportunities to win green jackets already. He should probably have two, and he could easily have three as well.

So it’s tempting to hand it to him now. But this is also the same guy who blew a six shot lead on the back nine on Sunday just two years ago, in heartbreaking fashion. I wrote this at the time:

But this tournament builds on itself. Next year, or the year after, or five years on, Spieth will be standing on the 12th tee, on Sunday, staring down the exact same tucked pin on the hole that has effectively taken two green jackets away from him already. Will he be able to fully block that out, or will it remain just to the side of his thoughts, lingering enough to cause him to doubt himself to the point of another mistake?

It’s tempting to assume Spieth will run away with it, but don’t get carried away. No one has ever posted four straight rounds of sub-70 golf in the Masters for a reason. And while if anyone is going to be the first to do that, it’s probably Spieth, we can’t hand it to him just yet.

It’s going to be a fun few days.