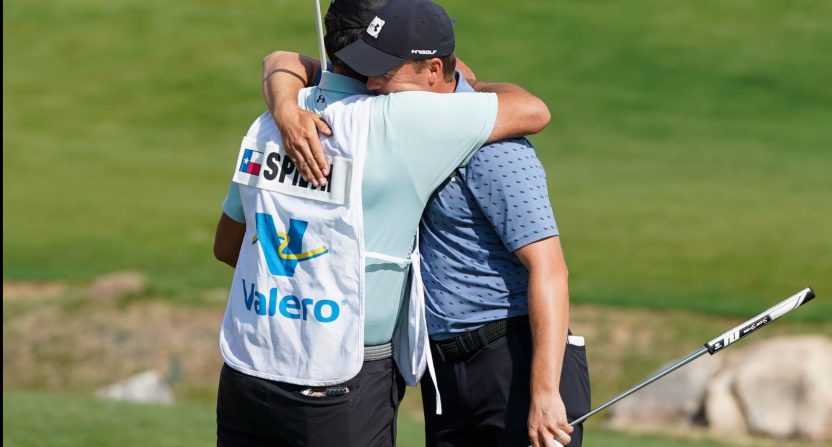 When Jordan Spieth won the 2017 Open Championship in a playoff over Matt Kuchar, it felt like just another step on Spieth’s ascendant trajectory.

It was his third major win (give or take a couple of John Deere Classic victories), and his eleventh pro win overall. He was four days away from his 24th birthday. He won again today, taking home the Valero Texas Open by two shots over Charley Hoffman.

In between, nearly four years, Spieth didn’t win anything at all. His world ranking tumbled from #2 to #92 at the end of this past January.

Jordan is now 38th in the world after Valero victory. He had slipped to 92nd after a missed cut at Torrey Pines… nine weeks ago

As bad as that outline sounds, watching it was maybe even worse. Spieth seemed lost at times. His OWGR page, which features all of his finishes going back to early 2019, laid out in graphic detail (literally and figuratively), isn’t pretty.

Aside from a random T3 at the 2019 PGA Championship, things had been fairly bleak for a player of Spieth’s caliber and pedigree. He wasn’t on the 2019 Presidents Cup team, and had the Ryder Cup been held in the fall of 2020 as scheduled, he probably wouldn’t have been on that team either. Early in 2021, though, there were obvious signs things had changed. After a quick session with legendary instructor Butch Harmon (which Harmon was quick to note did not mean he was working with Spieth full-time), results turned around.

Butch Harmon tells @MichaelBreed that he did look at Jordan Spieth's swing in October but that he is NOT working with the 3-time major winner.

And was bothered by reports stating he was. pic.twitter.com/ACEPRWESQy

Spieth missed six cuts in 2020, despite a pandemic-abbreviated PGA Tour schedule. He missed one at Torrey Pines this year (after which he fell to 92nd in the world). Since then, here’s his run of form:

That’s an incredible turnaround. After the victory, Spieth now sits comfortably inside the top 50 in the world once again, meaning he won’t have to worry about making the tour’s top-tier events. One event he was in regardless: next week’s Masters, where Spieth’s exploits are both famous (a win, two T2s, and a T3) and infamous (his 2016 collapse at Augusta is the prologue to any book about his trip to golf’s wilderness.)

"It's been a long road."@JordanSpieth is back in the winner's circle for the first time since 2017. 🏆 pic.twitter.com/CvlN5bKJ9m

Now he’s heading from his home state of Texas to Magnolia Lane, where he’s already one of the betting favorites (trailing just world #1 and defending champion Dustin Johnson and everyone’s favorite thick golfer Bryson DeChambeau as of Sunday night on DraftKings.)

It’s tough to win at all (hence this entire post) but it’s especially tough to win two weeks in a row, and it’s absurdly difficult to win a major. But it’s still very, very tough to bet against him right now, because Spieth lends himself to projecting streaks. He’s so vocal and demonstrative from shot-to-shot that momentum seems real, even when it isn’t.

I bet on Spieth to win the Masters after his opening round this past Thursday. I’m not going to bet against him now.