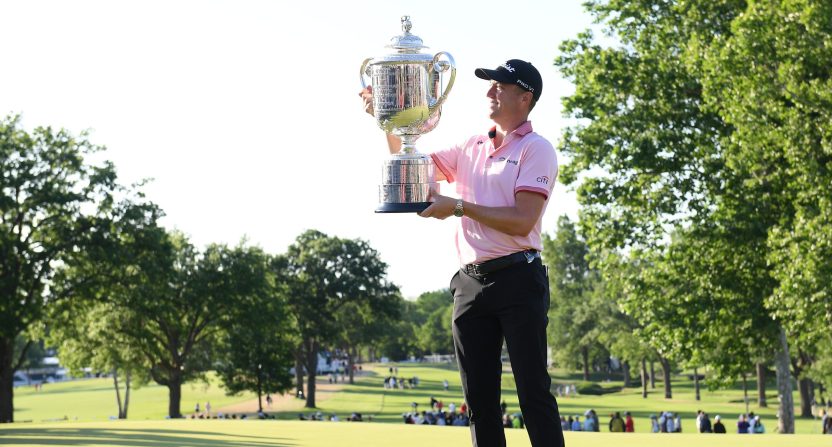 When the final round of the PGA Championship started, it didn’t seem like Justin Thomas had much of a chance to win. But when all was said and done at Southern Hills, Thomas stood on top of the field.

Thomas began the day seven strokes back of 54-hole leader Mito Pereira. That deficit moved to eight early in the round. But none of the golfers ahead of Thomas created much separation as he clawed his way back into contention. Thomas finished with a 67, but he missed a makeable par putt on the 18th hole, which seemed to end his chances. But when Pereira collapsed on the 72nd hole, Thomas and Will Zalatoris found themselves in a three-hole playoff — which Thomas won.

Both players opened the playoff with birdies on the par-5 13th hole. They next went to the 17th hole tied. Thomas took full advantage of the short par-4 with a stellar tee shot that finished on the green.

Yeah, this shot was worth the club twirl. pic.twitter.com/S524NtY86u

Thomas two-putted for a birdie, while Zalatoris made par. Both players reached the 18th green in two shots. Zalatoris had a chance to apply pressure to Thomas with his birdie putt, but he missed, leaving Thomas two putts for the win. Thomas did that to secure his second major championship, adding this Wanamaker Trophy to the one he earned in 2017.

A comeback for the ages 🏆 @JustinThomas34 overcomes an 8-shot deficit to win his second @PGAChampionship in a playoff. pic.twitter.com/FBF8gEirB9

Thomas’ victory tied a record for the largest comeback in PGA Championship history and one of the biggest in any major.

Justin Thomas had a 7-shot 54-hole comeback on Sunday to win the 104th PGA Championship.

That is tied for the 3rd-largest comeback in any major championship; only Paul Lawrie (10 at 1999 Open) and Jack Burke Jr. (8 at 1956 Masters) trailed by more. pic.twitter.com/KdhnzoMMUi

What a wild tournament. None of it made sense and somehow Justin Thomas wins.

JT and Bones!! That was some impressive golf in the playoff! Congrats @JustinThomas34 🐺

Congrats to Justin Thomas on his PGA win!!!

Native Kentuckian gets it done

I remember interviewing Justin Thomas after he shot 63 on Saturday at the US Open at Erin Hills. I asked him about being compared to his contemporaries despite having no majors.

He was annoyed. He bristled at the idea he’d underperformed. And I have always loved that attitude.

Justin Thomas!!!! 2x PGA Champ. What a ring to it. So cool given his connections to PGA of America.

Indeed, Thomas’ father, Mike PGA club professional, as was his grandfather, Paul. Given the significance of the PGA Championship to club pros and that club professionals get a chance to play in it, it might mean more to him than most other golfers.