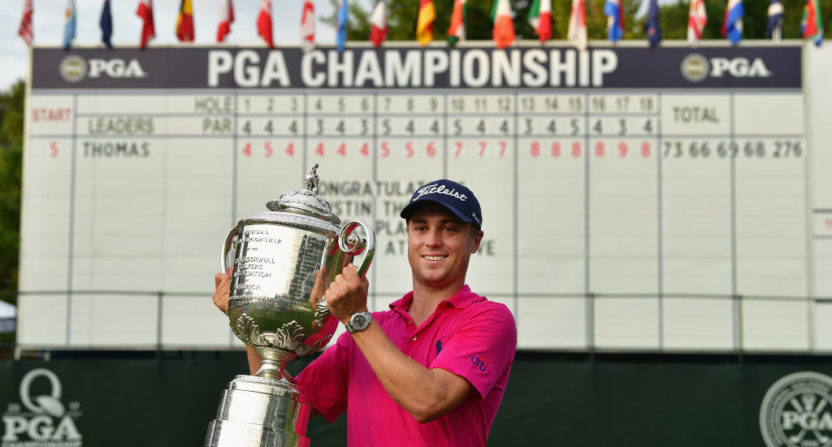 Let’s get something out of the way up front: Sunday’s PGA Championship finish featured a leaderboard filled with recognizable names, plenty of lead changes and in Justin Thomas, a deserving champion who further advances the ascension of golf’s superstar-laden younger generation.

For some people, that was likely a fun watch. Everyone’s entertainment standards are subjective, and there’s nothing worse than reading a piece telling you not to enjoy something you like or liked. (Hello, Pitchfork!)

Having said that, though, Sunday’s final round just felt a bit less than the sum of its parts. Part of that, of course, is the tournament itself. The PGA Championship is a distant fourth when it comes to the four majors, something the PGA of America and the PGA Tour essentially acknowledged with their long-rumored decision to move the event to May.

The tournament normally makes up a bit of the prestige deficit by offering up perhaps the best and deepest field of any golf tournament each year. That’s not a small thing, and it often makes for tight leaderboards and a lack of wholly unfamiliar personalities. This year was no different on that front.

Coming down the stretch, Justin Thomas led or was tied with a group that included players like Hideki Matsuyama, who won last week’s WGC-Bridgestone, sits at No. 2 in the world, and would almost certainly have a major or two by now if he could make putts with any regularity; Patrick Reed, the divisive hero/villain (depending on your point of view and whether or not it’s a Ryder Cup year) who has yet to break through at a major; Rickie Fowler, who will likely win one of these at some point, because he’s a damn good player; and Louis Oosthuizen, a former British Open champion who yesterday completed his career grand slam for runner-up finishes, and took the result very hard:

In the post-Tiger, nearly post-Phil era, that definitely counts as a stacked finish, especially with rock-solid players like Kevin Kisner and the resurgent Francesco Molinari keeping things interesting as well. (Though Molinari’s putting grip did little to help my enjoyment of the event.)

So what was wrong? A bunched leaderboard of big names is one of the best kinds of tournaments, right? Second only, perhaps, to when two players break away from the field for a classic duel. Still, in the end, there wasn’t much drama, and even in the midst of the action, things felt off, watching at home. CBS bears some of the blame. They’re perhaps the least-equipped network when it comes to covering constantly shifting leaders and storylines, what with their commitment to a prepackaged narrative and a seemingly steadfast refusal to show the barest minimum of live golf.

The solo leader, six holes to play in a major, chipping from just off the green, and you don't show it live! I mean how is this possible?

The shot referred to there was this one:

That was probably the second-best highlight of the day, after an earlier birdie that featured a Jordan-shrug after Thomas’s ball hung on the lip for an eternity:

Those are cool moments! Both happened earlier in the round, though, and things were much less fun near the end.

Time and again, leaders or contenders looking to post a clubhouse number that might pressure Thomas down the stretch stepped to the 18th tee, and time and again they finished the round disappointed. Reed and Matsuyama bogeyed the final hole. Fowler had to scramble from distance to make par, as did Molinari. Kisner was mathematically alive as he stood in the fairway, needing a miracle eagle to force a playoff, and he overcooked a draw, leaving with double and a T7 finish instead of the T2 he deserved.

Hell, even Thomas himself bogeyed the 18th, playing it safe after driving it into a fairway bunker. That carnage points us to perhaps the biggest reason the tournament didn’t feel as fun as it should have: the course itself. Maybe more accurately, the course setup. Quail Hollow has hosted a regular tour event since 2003 (and has hosted professional events dating back to 1969), but the course players saw this week was a different one, despite the fact that last year, the winning score for the Wells Fargo was -9.

Thomas won this year’s event at -8, so on the surface it might not seem that different. But the difference was felt in the field. Despite boasting a much stronger, deeper group of competitors, only 12 players finished under par for the week. At last year’s Wells Fargo, 27 did. As always, difficult isn’t necessarily bad. But this setup felt much more like the traditional U.S. Open approach that many slammed the USGA and Erin Hills for lacking earlier this year, and that wasn’t really a good thing.

It was a tournament that will likely be remembered as Justin Thomas’s first of multiple major wins, which isn’t nothing. Thomas is a legitimately funny, interesting guy, part of the Jordan Spieth/Rickie Fowler/Rory McIlroy clique of young stud golfers who are also, to all appearances, reasonable, well-adjusted human beings. The future of the sport has never been more full of talent. Thomas is also incredibly social media/new media friendly, which makes sense for a 24-year-old, and is endearing to people like me, who want golf to grow in different ways.

I’m certainly happy for him. In June, I watched him field questions after his Saturday 63 at the U.S. Open, where he was as engaging as could be given the circumstances, though he clearly felt the weight of his accomplishment, and was drained for Sunday, when he teed off in the final pairing and shot a 75 to lose by eight strokes.

But it likely won’t be remembered for much else, unless you enjoy Ian Poulter running funny and/or berating rules officials:

The only thing worse than Ian Poulter bullying his way to a sketchy ruling is the way he runs. pic.twitter.com/Vv4EnIg1vV

For me, the week’s defining sight might be balls landing on the green, bouncing high and hard, and rolling off the back. Obviously, players aren’t entitled to a soft landing, and occasionally there’s a bit of amateur golf schadenfreude when the best players in the world end up in the same spots I might end up in. But as it continued, and as I thought about how relatively rare that particular miss is for top-level players, it became more obvious that rather than being unwilling or unprepared to adjust for the firmness and speed of the greens, players simply had no other option.

When conditions are fast and firm, as they typically are for links golf, the adjustment is to land the ball short of the green and let it bounce on. But Quail Hollow is very much not a links design. Architects Arnold Palmer and Tom Fazio are purveyors of the 20th century American school of target golf, for better and worse, meaning plenty of greens don’t really offer a natural option to run the ball on, being elevated or tucked in a manner designed to be approached from above.

And when there was room to try running approaches, it seemed like the landing zones were all much, much softer than the greens they guarded, stopping balls dead and short. And while testing short games is something a great course should do, there’s only so much pleasure to be had in watching players lag lengthy putts and chips for gimme pars. Not all the holes were like this, of course, but 16-17-18 is a stretch known for its difficulty, earning its Green Mile nickname and then some. That’s the crux of my problem; defensive golf is legitimate golf, but it’s also perhaps the least exciting form of legitimate golf to watch.

And maybe the fact that there was more fun to be had early in the round factors in, as well; going from players making birdies and eagles and strategizing on reachable par 5s and drivable par 4s to watching a foregone conclusion over a boringly difficult final stretch is never going to leave a good taste. A great championship features a closing crescendo. I just didn’t get that from this tournament, despite all its virtues.

But Justin Thomas is the truth. Let’s not forget that.

3 thoughts on “Justin Thomas won the PGA Championship, playing great golf to do it; Why wasn’t it more fun to watch?”