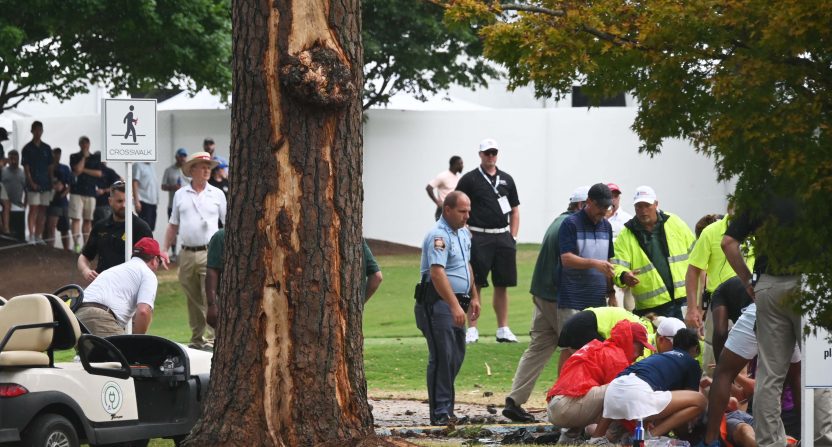 Impending storms forced players off the course at the Tour Championship today at Atlanta’s East Lake Golf Club, and about half an hour later, the reason for that suspension of play became frighteningly apparent.

That’s when lightning struck a tree amidst a crowd of spectators still on the course, who were likely attempting to shelter under it.

Breaking from East Lake: lightning struck near a fan zone at the 16th hole. At least three people are down, possibly up to six

NBC caught footage of it as it happened:

Lightning strike on a tree during a weather delay at the Tour Championship, according to Mike Tirico there were 4 injuries, none of which were life threatening pic.twitter.com/YQpFmbXSb2

It’s incredibly fortunate that none of the injuries are life threatening. Here’s the statement from the PGA Tour:

Saturday’s third round of the TOUR Championship was suspended after six fans were injured following a lightning strike at East Lake Golf Club. Play was suspended for the day and will resume at 8 a.m. Sunday morning.

A storm caused play to be halted at 4:17 p.m. Saturday, shortly after the final group of Justin Thomas and Brooks Koepka completed the fifth hole. There were two lightning strikes 28 minutes later. One strike occurred near the maintenance area, while another struck a tree near the 16th tee. Debris from that strike injured six people.

Five fans were transported from the property via ambulance to area hospitals for further medical attention. One other fan was treated and released on-site and did not require transportation to a hospital.

The Tour also attempted to justify their timeline for the day:

Scoreboards informed fans that inclement weather was approaching the course, and fans were asked to evacuate the course when play is suspended.

“When we suspend play, we encourage everybody to leave and take shelter anywhere they can,” said Mark Russell, the PGA TOUR’s Vice Presidents of Rules & Competition. “We opened up hospitality areas that are grounded, a lot of other places like that. You’ve got a lot of people, and you have to do that quickly.”

If you’re wondering why there were still fans on the course, it’s important to remember that even with 30 minutes notice, a golf course is a very big place. For a lot of people, a gate or an available shelter might not be within easy walking distance. Coupled with the pop-up nature of the storms and the likelihood of good weather after, it’s not hard to see a few fans checking their phone radar and deciding it’s not worth it to head all the way back to their cars.  Especially if they made any wagers on the tournament with Mobile Slots Sites.

As we saw this afternoon, that’s not good! It’s a tough situation, with an obvious array of moving parts and a lot of ground to cover; you can’t just send people down the aisles to a covered concourse as you can at a normal sporting event. But today could have ended with multiple spectators dead. It should never have to get to that before action is taken, whatever form that action ends up taking.