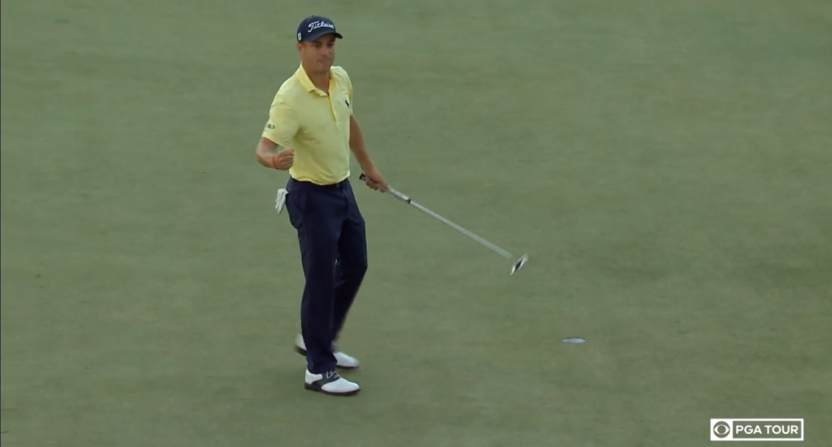 Justin Thomas, by and large, seems like a pretty good guy. He’s wildly talented, having broken out in a big way last year with a run that culminated in his first major win at the PGA Championship.

Just last week, he adorably dove away from swooping birds while getting ready for an interview.

Today, Thomas won the Honda Classic on the first playoff hole, defeating Luke List. And while the event was entertaining, featuring both Thomas and List birdieing 18 to force the playoff, Thomas’s actions on the 16th tee drew plenty of scrutiny.

Tied for the lead and in the middle of PGA National’s Bear Trap, Thomas took iron off the par 4 16th tee to ensure a fairway hit. That hole is all about ensuring a good lie and a proper angle for the intimidating approach over water. But as Thomas’s ball was in the air, a fan in the gallery shouted for the ball to get in a bunker.

CBS caught most of the ensuing interaction between Thomas, the fan in question, and bystanders:

“Who said that? Who just yelled for that ball to get in the bunker? Was that you? Enjoy your day, buddy, you’re gone.”

Someone else chimes in to point out the offender:

“That guy right there in the Seminole hat.”

The CBS music promptly entering the mix at full blast is the real kicker.

The question has to be asked, though: Does this really rise to the level of ejectable offense? The offender didn’t yell out during Thomas’s swing. He didn’t even yell “Mashed potatoes!” or something similarly derivative. He did express his hopes that Thomas’s tee shot would end up in a hazard, but is the role of every golf spectator to be 100% positive and supportive at all times?

Thomas has likely heard much worse, and he even spoke out against fan behavior just last week.

“It was pretty wild this first couple days. It was all right for a little bit today, but there at the end it got a little out of hand,” Thomas said at his post-round press conference. “I guess it’s a part of it now, unfortunately. I wish it wasn’t. I wish people didn’t think it was so amusing to yell and all that stuff while we’re trying to hit shots and play.”

Even so, today wasn’t a great look.

It wasn’t the only thing CBS cameras caught him saying; after his win, he (understandably) let out an f-bomb that CBS caught in full.

As for the fan interaction, there are certainly examples of fans crossing the line, but this instant reaction from Thomas to something not said during his swing comes across pretty poorly. He’s almost guaranteed a spot on the Ryder Cup team this fall in France, where he’s sure to hear much worse than that.