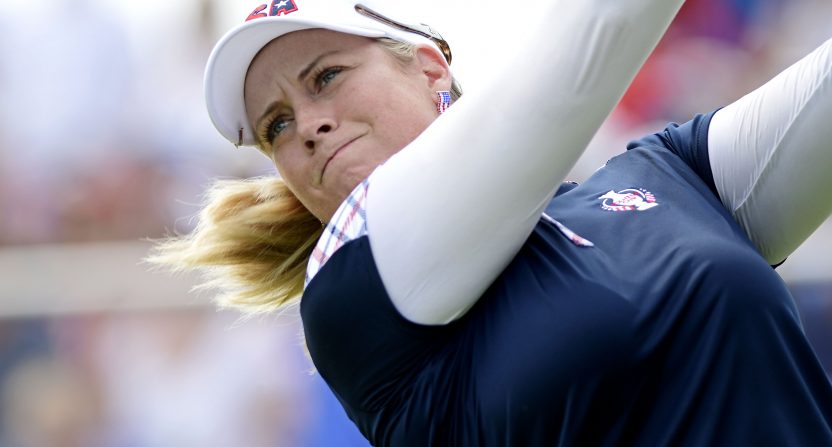 Given the recent surge of PGA Tour and Web.com Tour invites for celebrities and professional athletes in other sports, it’s fitting that a tournament would actually look to add a professional golfer who isn’t otherwise exempt into its field.

In this case, it’s a woman who competes on the LPGA Tour. According to Dave Shedloski of Golf World, 8-time LPGA Tour winner and 2-time major champion Brittany Lincicome will in all likelihood tee it up at the Barbasol Championship in July.

If she accepts the exemption, a virtual certainty according to the source, into the tournament held opposite the Open Championship, Lincicome, 32, would become the fifth female professional to compete in a PGA Tour event, joining Michelle Wie, Annika Sorenstam, Babe Zaharias and Suzy Whaley.

Wie competed in eight events between 2004 and 2008. Though she never made a cut, a five-time LPGA winner missed by just one stroke in the 2004 Sony Open in Hawaii as a 14-year-old. Her second-round two-under-par 68 is the lowest ever a woman has ever recorded on the tour.

Prior to that, Whaley, a club professional who is the current vice president of the PGA of America, qualified to compete in the 2003 Greater Hartford Open after winning the Connecticut Section PGA tournament in 2002. Sorenstam, in the midst of her dominance on the LPGA Tour, received a sponsor’s exemption into the 2003 Colonial National Invitation Tournament in Fort Worth. Both missed the cut.

Tony Romo, Steph Curry, and country singer Jake Owen have all played PGA Tour or Web.com Tour events in recent months, with Romo’s participation the most widely-publicized. But it’s important to remember that none of those men are actually professional golfers. And while very good male athletes with scratch-to-plus handicaps are certainly talented players, they’re not as good as women who compete professionally on the LPGA Tour, much less women with the success of Lincicome.

Lincicome’s participation isn’t exactly random, but then no sponsor’s invitation is:

Perio, Inc., based in Columbus, Ohio, is the maker of both Barbasol and Pure Silk. It has sponsored the Pure Silk-Bahamas LPGA Classic since 2013 and the Barbasol Championship, played opposite the Open Championship, since 2015.

Lincicome, who is 32nd in the Rolex Women’s World Golf Rankings, is a Pure Silk ambassador. The Seminole, Fla., resident is competing this week in the U.S. Women’s Open at Shoal Creek near Birmingham, Ala.

And the Barbasol isn’t a full-field event; it sits opposite the British Open on the schedule, and therefore is the exact sort of tournament that is best served by headlines such as this one. But that certainly doesn’t mean it’s not a worthy story, or that whatever Lincicome accomplishes can’t be taken seriously. Frankly, golf should be the sport with the most even playing field, in terms of gender; there are women who hit the ball farther than some male pros, after all, and the PGA Tour is reportedly considering a crossover event with the LPGA Tour in the near future.

Hopefully she plays well, and we see more things like this going forward.