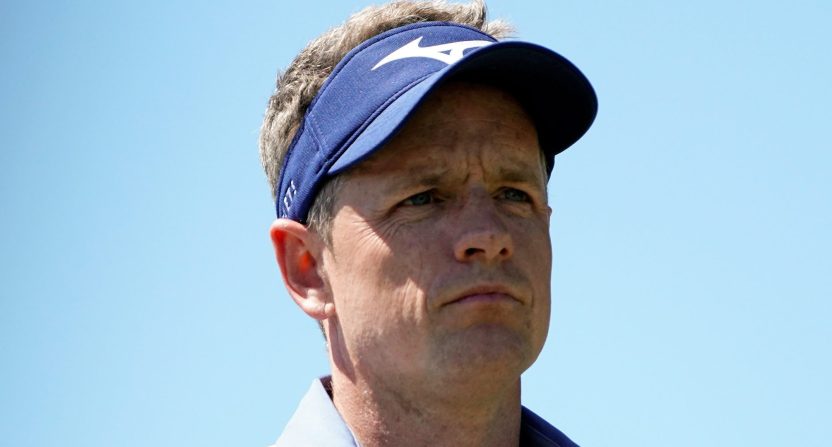 Due to his involvement with LIV Golf, Henrik Stenson will not be the captain of Europe’s Ryder Cup team in 2023. Luke Donald is the reported replacement for Stenson. He expressed his feelings about the honor while taking a jab at the now former captain on Thursday.

Donald denied reports that the decision to make him the 2023 captain had already been made. He did say (per Adam Schupak, Golfweek) “I know I have a very good chance,” but added that “Thomas Bjørn and a couple other guys are under consideration.”

Donald also expressed his disappointment in Stenson for bolting for LIV after being named captain. Furthermore, Donald made it clear that he would not follow in Stenson’s footsteps.

“I’m disappointed I guess that he would put his name forward and then go to LIV,” Donald said, per Schupak. “I understand certain guys going to LIV, in certain situations in their careers and stuff, that makes sense. But obviously something big to give up. If I got this captaincy I would live up to my word and see it through,” he said. “Let me put it that way. I wouldn’t be doing a Henrik.”

Despite what Stenson may say, he knew that joining LIV Golf would cost him the Ryder Cup captaincy. That was a known punishment well before Stenson was ever named as captain. So, shots like this from Donald are fair game and Stenson should expect to hear more of them going forward.

The Ryder Cup is still more than a year away. It will run from September 29 through October 1, 2023. But while there’s a lot of time before the event starts, being a captain requires a lot more than just showing up for the week and filling out the lineups. If Donald is indeed the man who replaces Stenson, hearing his firm commitment to the job must be a relief for Ryder Cup Europe.

The United States won the most recent Ryder Cup, routing Europe 19-9 in 2021 at Whistling Straits and not losing any one of the five sessions. But despite America’s victory in the most recent event, the European team will be looking to add to a long winning streak. Europe has won each of the last six home Ryder Cups, last losing in Europe in 1993.