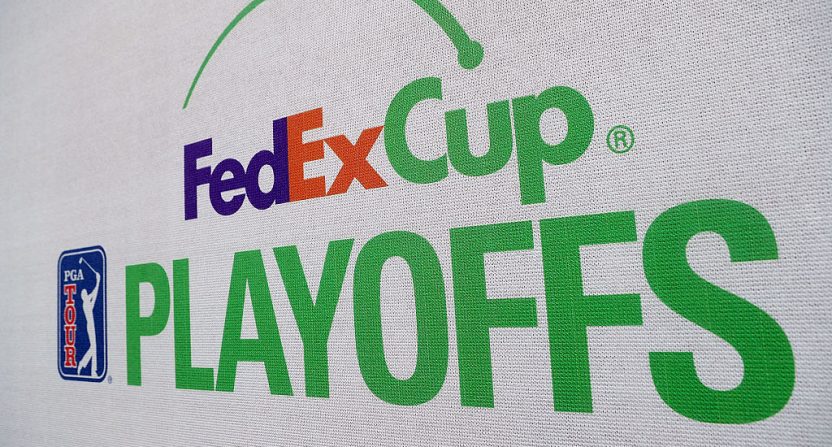 The FedEx Cup has been around since 2007, and is moving into its second decade of prominence on the PGA Tour.

The year-end $10 million playoff prize has been a pretty successful venture for golf; it adds some nice drama (and, more importantly, quality fields) after the PGA Championship, and lets the Tour compete with football in the late summer/early fall months. (It doesn’t win very often, of course, but it’s more competitive than if there weren’t marquee events going on.)

Last year’s Tour Championship saw Rory McIlroy defeat Ryan Moore after a lengthy playoff, which tied in with the debate over who should get the last Ryder Cup captain’s pick for the United States (which ended up going to Moore.) FedEx has to front the cash for the bonus, of course, and it’s a gigantic purse, but they also get a ridiculous amount of exposure throughout the year.

Every week, there’s an update on the FedEx Cup standings, which is laughable considering the fluctuation that takes place as the season continues. The branding is all over the place, there’s plenty of ads, and FedEx also sponsors the live streaming coverage online. But apparently that’s not enough; FedEx’s new deal to continue the sponsorship also has language preventing players from endorsing FedEx competitors.

According to sources, the clause will keep players from participating in the season-long race if they have endorsement deals with one of FedEx’s competitors.

“All I’m going to say on that front is when you’re in business with someone for 30 years, and you’re about to commit to 10 more, you do some things to protect each other on a long-term basis,” commissioner Jay Monahan said. “That’s what we’ve done in this agreement, and our players know that; our players understand it; our players think so highly of FedEx and what they’ve meant to them in terms of playing financial opportunities. So we do everything we can to protect our partners.”

Two prominent players are sponsored by UPS, but both Lee Westwood and Louis Oosthuizen will reportedly be grandfathered in. This opens up an interesting debate, as players are technically independent contractors. As Hoggard notes, there is language in existing PGA Tour policy that governs sponsorship deals, but that’s more of a morals clause to prevent players from wearing shirts emblazoned with beer or tobacco ads. It’s unclear how exactly this will go over with players.

On one hand, their rights are being a bit infringed upon. But on the other, FedEx is pumping an absurd amount of money into the sport each year, and it’s spread about far more evenly than what any of their competitors are putting into the game. Still, as agent Chubby Chandler notes, the precedent might not be a good one:

“I’m grateful the two guys are alright and I understand why they [the Tour has] done it, [but] what will they do if MasterCard wants to do the same thing?” Chandler said. “It opens up a bag of worms. Do you go on the amount of money they pay or what? Do you set aside one sponsor for another sponsor? … Legally, I can’t see how it works. The guys are independent contractors.”

It’s reminiscent, in a way, of UFC signing their apparel deal with Reebok, which cost some fighters quite a bit of money. The FedEx Cup events offer more than large purses, though. If a golfer is unable to compete or compile FedEx Cup points, it could impact their ability to keep their Tour card, and they could miss out on other benefits as well. (All 30 golfers who qualify for the Tour Championship, for example, are automatically qualified for all four majors the following year, along with a variety of other big-time tournaments.)

It’s a fine balance, though as the PGA Tour doesn’t have a union, it’s hard to guess what recourse the players have even if they did want to challenge the policy. The fact that two UPS players were grandfathered in does demonstrate a bit of flexibility, of course, which bodes well for negotiations going forward if there are issues.

It shouldn’t be a surprise that FedEx wants this; all that branding and year-long buildup looks a bit silly if a player with a UPS logo shirt holds up the FedEx Cup trophy in an event that FedEx money helped to legitimize.

This might not ever been an issue, but it’s certainly worth monitoring.