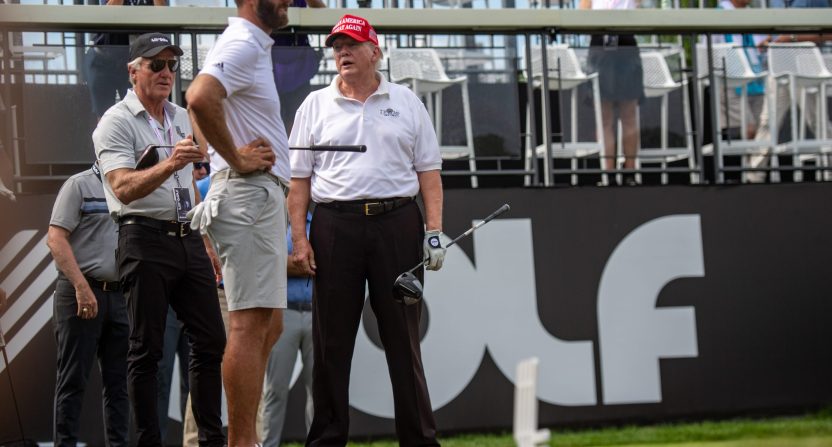 The recent Saudi-backed LIV Golf Invitational at Trump National Golf Course in Bedminster, NJ brought with it a lot of attention, though much of it wasn’t positive. Two New Jersey politicians are considering a proposal that would ban events like it from taking place in the Garden State in the future.

According to NJ.com, a proposal by state Sens. Andrew Zwicker (D) and Richard Codey (D) would prohibit sports organizations that operate primarily with money from sovereign wealth funds from hosting sporting events in New Jersey. Given that LIV Golf is backed by the Public Investment Fund, the sovereign wealth fund of Saudi Arabia, that would prohibit them from holding any future events in the state.

“New Jersey has long been fertile ground for producing top-quality athletes, and for hosting major sporting events known throughout the world,” Zwicker said.

“Yet we do not need further recognition or notoriety from hosting competitions that are bankrolled by repressive governments or unsavory actors like Saudi Crown Prince Mohammed bin Salman. This legislation will prohibit the Saudi PIF or any other sovereign wealth fund from using New Jersey or its sporting organizations in any shameful ‘sports-washing’ endeavors.”

The LIV Golf Invitational was met with protests by families of September 11th victims, which led to some very strange comments by former President Donald Trump, who played in the pro-am that week. Trump also courted controversy by plastering the presidential seal all over the club, which violated federal law.

Trump and his family have close ties with the Saudi Arabian backers of the golf tour (The Saudi investment fund gave $2 billion to Kushner’s private equity firm after Trump left office) and are likely to be disappointed by the possibility of a future ban of events at Trump National.

It remains to be seen if the proposal will actually pass. It would need to clear both the state Senate and Assembly and be signed by Gov. Phil Murphy in order to become law.