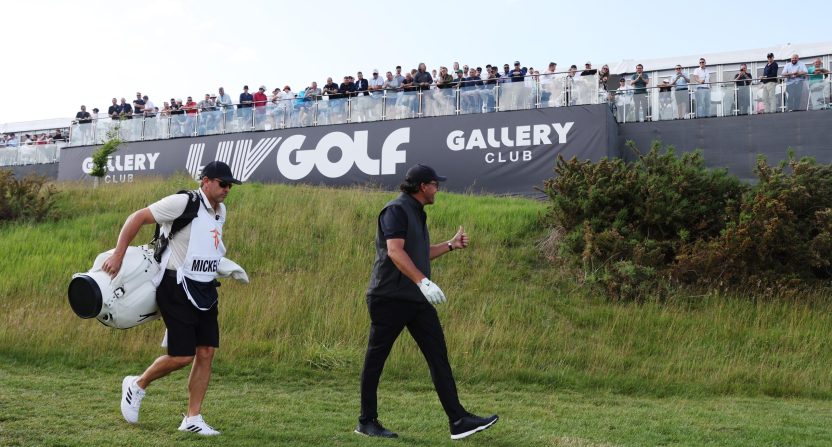 The players who have joined LIV Golf have received some flak following their decision to chase the Saudi Arabian government’s Public Investment Fund money and leave the PGA Tour for greener pastures.

Despite this, most majors in golf have announced that LIV Golf players (including Phil Mickelson, seen above at the first LIV Golf event) would be allowed to play if they had already qualified for the event. And now the R&A (The Royal & Ancient Golf Club of St. Andrews) has made their official decision on the matter for the upcoming Open Championship at St. Andrews in July.

R&A chief executive Martin Slumbers released a statement on Wednesday saying that the tournament has been known for openness, which will continue for LIV golfers.

“The Open is golf’s original Championship and since it was first played in 1860, openness has been fundamental to its ethos and unique appeal.”

“Players who are exempt or have earned a place through qualifying for The 150th Open in accordance with the entry terms and conditions will be able to compete in the Championship at St Andrews.”

“We are focused on staging a world class Championship in July and celebrating this truly historic occasion in golf. We will invest the proceeds of The Open, as we always do, for the benefit of golf which reflects our purpose to ensure that the sport is thriving 50 years from now.”

LIV Golf players will be allowed to compete in next month’s Open Championship at St. Andrews. pic.twitter.com/YENQacAdJK

Many around the golf world believe that this is the correct decision, and applauded the R&A for their decision.

No reason why they shouldn't be allowed. It's an OPEN. Come One. Come All if you qualify. I find it humorous how Tour Players are judging the so called "sell outs" jumping tours for money lol What's the PGA Tour's response to LIV: money money money 💰🤦‍♂️

And they should. They’ve already met the credentials to qualify. Next year they should go thru qualifying in order to play

And that ladies and gentlemen, is how you write a statement.

It was always expected that those who have qualified for this year’s majors would likely be able to play in those events. That being said, it will be interesting to monitor whether or not LIV Golf events receive Official World Golf Ranking (OWGR) points in the future.

LIV Golf commissioner Greg Norman put in a request for this earlier this week. That would allow more players to qualify for major championships in the future while competing for LIV.

If they are not granted points for LIV Golf events, fewer and fewer players who have joined that series will be seen in majors in the future.