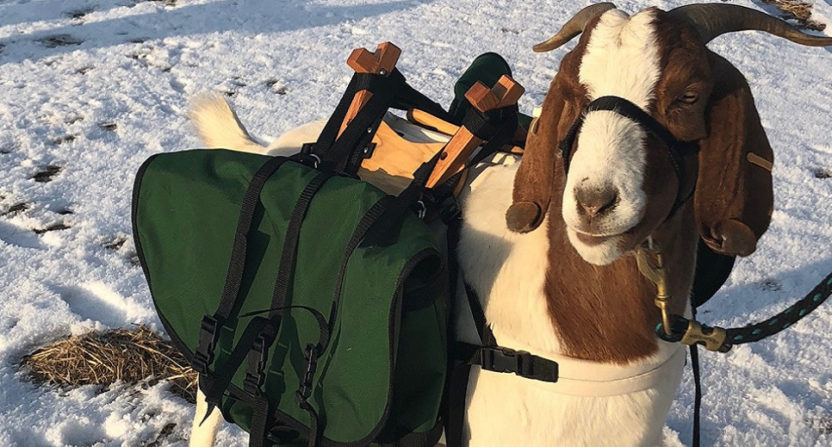 We’ve seen all sorts of unusual things on golf courses over the years, from streakers to alligators to kangaroos, so why not goats? An Oregon resort is opening up a new course, and they’re planning to use goats as caddies, as per Alex Myers of Golf Digest:

The Retreat & Links at Silvies Valley Ranch in Seneca announced the opening of a new seven-hole course called “McVeigh’s Gauntlet” in 2018. As if that name wasn’t cool enough, golfers will have the option of taking trained goats as caddies when they take on the seven-hole track. Hey, if goats have been allowed to infiltrate yoga, then why not golf? Goats. So hot right now.

According to the resort, the caddies are raised right on the ranch. And they’ll be equipped with a special pack that will allow them to carry drinks, golf balls, tees and even a few clubs.

“We’re taking the golf experience at Silvies Valley Ranch to a new level in 2018,” says Silvies owner Dr. Scott Campbell. “We’ve been developing an unprecedented caddie training program with our head caddie, Bruce LeGoat, to ensure that he and his team are ready for the opening of The Gauntlet this summer. We’re truly redefining both goat and golf operations at the ranch. Can you think of another course where its caddies were literally born, raised and fully educated on-property? We will get you a caddie who really knows the course and won’t give you any bad advice – and they work for peanuts!”

Of course, these caddies aren’t going to be able to help you with club selection or with slow play. But we can trust that “Bruce LeGoat” has trained them well, and Campbell is certainly right that they won’t give you bad advice and they won’t talk your ear off. And this seems fitting for the course, which the resort website describes as “a fun, care-free course to help players settle bets,” complete with quite the history:

McVeigh’s Gauntlet is named for Myles McVeigh, an early pioneer who homesteaded in the Silvies Valley. A drinking buddy of the Craddock brothers and the Hankins boys, he settled on Paiute Creek and upper Camp Creek.

The rumor is that he brought his “bad habits” with him when he emigrated from Scotland. These may have influenced his naming of Moonshine Spring and his close friendship with neighbor Charlie Owens, who was known for his highly productive rye field. McVeigh was also rumored to play a little golf and supposedly had a small course on Paiute Creek, where the 13th green is today. Course designer, Dan Hixson, found evidence of McVeigh’s course while building the Hankins & Craddock courses.

McVeigh was also a musician and had an organ in his cabin. The locals say that his melodious ballads chased all the rattlesnakes out of Silvies Valley, and the area is still free of them to this day.

Myles McVeigh was best known for throwing down the “gauntlet” with his friends in the valley, taking on all challengers, at least when it came to shots of rye, or just good fun. Please play in that tradition!

Well, that’s good that there aren’t any rattlesnakes there to bother the golfers, or the goats. And the goats could certainly be helpful in transporting those shots of rye. This is a fun plan, and it doesn’t sound like a baaaaad idea. And if it doesn’t work out, they could always hire the guy who decided to live like a goat.