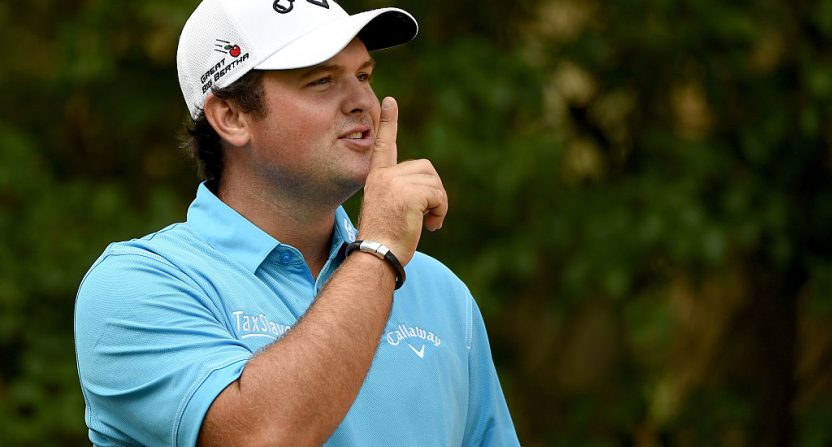 Patrick Reed is, let’s say, a divisive figure in golf. That might actually be too generous, but let’s stick with divisive.

There was the time he prematurely said he considers himself a top-5 player in the world. Or the various accusations (including cheating) that plagued him as a college golfer, including his final stop at Augusta State, when some of his teammates approached his opponent and told him they hoped he “kicked the shit out of Patrick Reed.”

Whatever fandom Reed possesses likely stems from his two heroic outings at the past two Ryder Cups, including his otherworldly performance last fall at Hazeltine, when he won five points for the Americans including an unforgettably entertaining Sunday singles victory over Rory McIlroy.

Reed has played unspectacular golf since that week; in 2017, his best finish came back in January at the Tournament of Champions, where he tied for 6th. More recently, his play had really struggled; he finished near dead last at the WGC-Mexico event, didn’t win a match at the WGC-Match Play (his preferred format), and then missed two straight cuts at the Shell Houston Open and, most painfully, the Masters.

That’s a bit odd, and after he opened this week’s Valero Texas Open with a 69, Reed opened up on his recent run of form, but if you were expecting him to take any responsibility, well, you’re just not paying attention. Via Kyle Porter of CBS Sports:

“Lies and lofts were off on the irons two to two and a half degrees, which is a lot,” Reed said. “Because of that, it was making me have to alter my golf swing to get the golf ball to go straight. When I was swinging well, all of a sudden I would look up and the ball is long and left. Consistently I’m, ‘What is it, is it me, what’s going on?’

“When you’re on the road as much as you are you always think it’s you, it’s not the equipment, you know. I hate using that as an excuse, no, it wasn’t me, the irons weren’t set up where they needed to be … but this was probably the one time that I could actually say my equipment wasn’t set up how it’s supposed to be for me.”

That’s Reed essentially blaming his equipment for his play, saying his clubs were improperly setup for his swing. While there’s no disputing that equipment can have a major impact on a player’s game, it’s fairly shocking that a world-class tour professional wouldn’t notice that large a disparity or change from past setups much sooner.

@TronCarterNLU A pro of his caliber doesn’t realize his shit is off 2* until 6 months into the 2017 season? Not buying it, Mr checkered pattern errything

It’s akin to suggesting that someone could mess with the tuning on a musician’s instrument without the musician realizing. (And if the musician doesn’t realize, he’s not much of a musician.)

The folks at Callaway, Reed’s equipment sponsor and provider, cannot be thrilled with this development. On the surface, Reed is throwing them under the bus, and they have no real way to defend themselves; this despite the fact that Reed might not even be utilizing their services. That’s because there are rumblings Reed has his own club guy do the actual work:

@GolfChannel My son went to the same guy who adjusts Patrick Reeds clubs. We had them checked the next week and every club was different

@GolfChannel My son knew right away!

@Steo_Hall @GolfChannel I'm pretty sure he uses a guy that works at the club where his coach teaches.i don't want to say names, because I am not certain

@Steo_Hall @GolfChannel I agree with you. I only know what happened to my Son.The same guy adjusts Patrick's clubs

I’ve heard that story from other people, as well; that Reed essentially has Callaway ship heads and shafts to this mystery man in Texas. (Josh Gregory is Reed’s coach, and he works out of a club in Dallas; beyond that, it’s tough to find details.) At the moment, that’s just a rumor. Callaway is obviously not going to come out to refute Reed’s version of events; he’s on staff with them, after all. (Through the end of the year, anyway, and at this point it seems unlikely they’d have interest in continuing the relationship.)

But is Reed throwing Callaway under the bus, or this mystery club builder? He certainly seems willing to let Callaway dangle on the hook. Anyone hearing or reading that quote would assume he’s referring to his main equipment sponsor, and the guys they have in the tour van week to week. (Guys who can’t defend themselves at all.)

Reed likely isn’t going to give a straight answer either; regardless of his clubs, his personal lie angle is very much askew. He’s definitely not going to give one at the Valero: hilariously, after all the equipment talk, Reed still missed the cut, shooting a second round 77. Reed’s problems were related to his putter, as he missed multiple short putts, losing 4.5 strokes to the field on the greens.

Maybe it’s easier to blame your equipment than admit you’re worried about the yips, but at a certain point, something has to change. Reed’s just as likely to rediscover his form as he is to lose it, probably more likely, but he’s going to run out of excuses very quickly. And when that time comes, Reed might wish he had a lot more goodwill banked with the golf world.