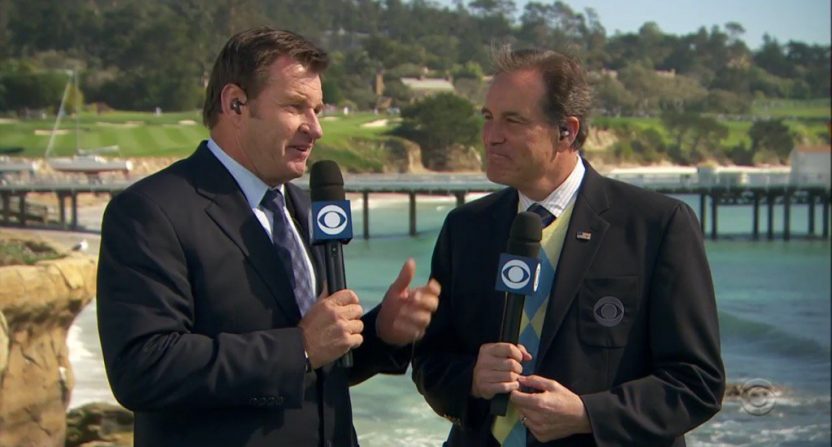 Pebble Beach is one of the most beautiful golf courses in the world. Few places on earth look better on television than Pebble Beach during the annual coverage of the AT&T Pebble Beach Pro-Am, especially for those of us in parts of the country staring down too many more weeks of winter.

The event routinely boasts a strong field (this year it features Phil Mickelson, Jordan Spieth, Dustin Johnson, Jason Day, Patrick Reed, and more) and as it normally falls the week after the Super Bowl, it has very little competition from the rest of the sports world. It should be must-see golf.

And yet, year after year, what should be must-see golf ends up as one of the most unwatchable golf broadcasts on the calendar.

The root problem is the “-Am” section in Pebble Beach Pro-Am. This tournament features four rounds of professionals paired with amateur players. That slows things down considerably, and as a logistics issue, it necessitates the use of three courses to play all four rounds.

The field rotates around the trio of Pebble Beach, Spyglass Hill, and Monterrey Point over the first three days, then gets cut down after Saturday, with the championship decided on Sunday at Pebble Beach.

CBS and the Golf Channel can’t properly cover three entire golf courses, which leads to complaints like this from yesterday:

Legit NBC golf question: Do they not allow TV coverage of Spyglass? Why am I forced to watch Andrew Loupe at Pebble instead of Spieth?

That’s a real issue, obviously. And in lieu of being able to show the pros on every course, CBS tends to fill the air on Saturday with plenty of amateur golfers. And while that can (very rarely) be entertaining, it’s more for moments like this one, when celebrities prove they have no real business playing golf alongside the best players in the world:

The problem, of course, is that most of these amateur shots aren’t actually entertaining. Nor are their attempts at wacky golf course antics. Though he’s far from the worst offender, even Bill Murray (2011 Pro-Am winner) can, on occasion, come across as trying too hard. Bill Murray!

There’s a reason celebrity golf tournaments don’t have a big following. Plus, the names aren’t all that known; a collection of actors and athletes is one thing, but few people care much about the multitude of CEOs and corporate execs who litter the field.

CBS, though, seems to think that’s why people are tuning in, which is an incredible disconnect from what the audience actually thinks. Saturday of Pebble Beach is essentially golf’s ultimate hate-watch for viewers, thanks to multiple stretches like this one, from 2016:

I tried y’all. Im out

It’s horrendous television. There’s no real equivalent, in televised sports. If CBS did a college basketball game in the same fashion, they’d show the opening tip, then cut to a rec league game outside the arena for ten minutes, before coming back to the real action.

Why subject the audience to this?

And that’s to say nothing of poor Peter Kostis, CBS’s top swing analyst, who ends up spending his Saturday giving straight-faced analysis of celebrity swings in super-slo-mo. It’s a very unfortunate Saturday tradition, as parades of amateurs hit tee shots on the 17th hole, then stride across to the broadcast booth to give interviews and listen to Kostis.

It’s a stunning percentage of airtime to devote to moments like this:

There’s sadly plenty more where that came from, just from 2016. This understandably frustrates people who watch the PGA Tour out of an interest in, well, PGA Tour pros:

The AT&T Pro-am is all fun & games, till I have to see Kostis breaking down celebrity swings on Saturday & amateurs chipping on a Sunday

The Saturday broadcast of the AT&T pro-am is the worst thing CBS airs all year long. And have you seen Mike & Molly!?

6 of the top 9 players in the world will be playing Pebble today. You’ll be seeing CEO’s shanking chips and getting asked about it.

You guys don't get it.

And it seems to be getting worse with each event. The PGA Tour should be concerned.

It feels like there’s an easy fix here, which is to dial back the celebrity golf, show as much actual professional golf as possible, and also, well, no, it’s just those two things.

Instead, though, this afternoon is going to be devoted to anything but golf at the highest level.

CBS has to know this. But they don’t seem to care, which is the most frustrating thing to a viewer. They seem to be under the impression that there’s a substantial audience out there conditioned to tune in for the “stars” at Pebble Beach, and CBS is willing to chase and appease that perhaps-mythical demographic at the expense of the loyal viewer base.

At the very least, it is the perfect hate-watch broadcast. There are plenty of potential drinking game options (shots of whales breaching! Chris Berman finishes in last place! Nantz breaks out that argyle sweater!) at least, and you can count the number of segments that fly past without the slightest hint of a live, professional golf shot.

And if you run into Peter Kostis this weekend, please offer to buy him a drink.