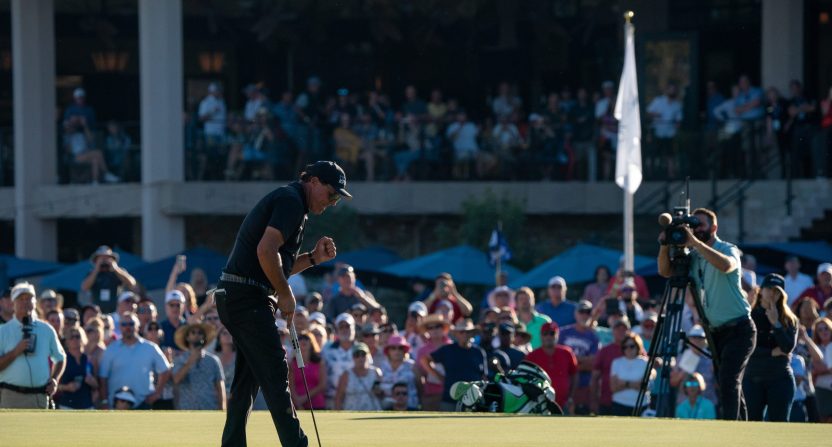 We don’t know yet if Phil Mickelson will actually play in the 2022 PGA Championship now that the PGA has denied its members permission to play in the Saudi-funded LIV golf tournament in London next month. But if he does decide to play, officials are concerned about the potential for a “circus” surrounding his return to the golf course.

Mickelson hasn’t competed in a PGA Tour event since the Farmers Insurance Open in January and missed his first Masters Tournament since 1994 following disturbing comments about human rights violations in Saudi Arabia. Along with losing some notable sponsors, he decided to take a break from golf and the public eye.

Mickelson recently applied to play in the PGA Championship as well as the LIV Golf event series in London. Now, it sounds like he’ll have to pick one or the other.

In the meantime, the PGA Championship gets underway next week and PGA of America CEO Seth Waugh recently appeared on the “Five Clubs” podcast and discussed the potential for distractions and a circus-type environment if Lefty makes his return to golf at their event.

“I hope what we can do is have that [the press conference] before the flag goes up,” Waugh said. “The idea is if he does play, and if he’s able to and allowed to… he would certainly have to face the media. But I hope it’s Monday or Tuesday… What we’re trying to do is deliver a major championship, not a circus.”

Good luck with that, Seth. Given that Mickelson hasn’t done any interviews or made public appearances since the controversy only add fuel to the fire for whenever he re-emerges. And if that happens at the PGA Championship, expect a circus whether you want one or not.