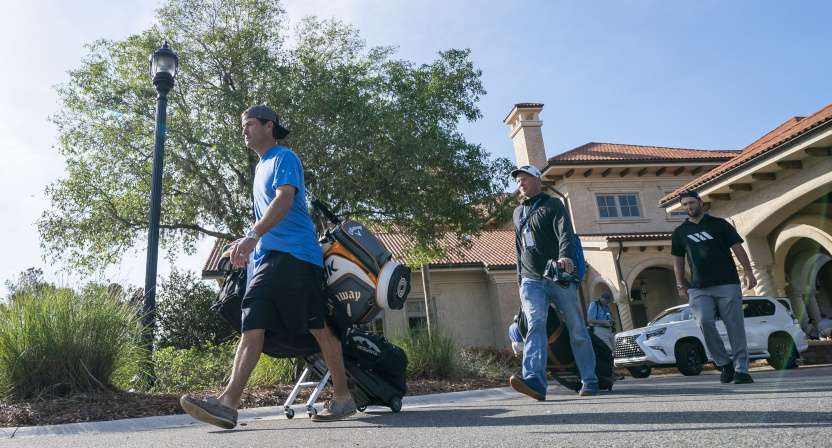 It looks like there won’t be much golf on the calendar for a while yet. Last Thursday, the PGA Tour canceled the Players’ Championship (partway through; players Kevin Kisner (left) and Jon Rahm (right) are seen above leaving after the cancellation) and its next three tournaments (the Vaspar Championship, the WGC-Dell Technologies Championship, and the Valero Texas Open) over concerns about the spread of the COVID-19 coronavirus. On Friday, the Masters was postponed, and on Tuesday, the PGA Tour canceled four further events through May 10: the RBC Heritage at Harbour Town in South Carolina, the Zurich Classic of New Orleans, the Wells Fargo Championship at Quail Hollow in Charlotte, and the Byron Nelson in Dallas. They also announced the postponement of the PGA Championship (set for May 14-17 at TPC Harding Park in San Francisco) to an indefinite date. Here’s more from the tour’s official statement:

The health and safety of everyone associated with the PGA TOUR and the global community is and will continue to be our No. 1 priority as we navigate the ongoing health crisis related to the Coronavirus Pandemic.

On March 12, the PGA TOUR made the announcement to cancel or postpone four weeks of events on all six Tours through the week of the Valero Texas Open (March 30-April 5). Augusta National Golf Club also announced the postponement of the Masters Tournament (April 6-12).

With the most recent recommendations from the Centers for Disease Control, the World Health Organization and the Office of the President of the United States, the PGA TOUR will now cancel four additional events: RBC Heritage (April 13-19); Zurich Classic of New Orleans (April 20-26); Wells Fargo Championship (April 27-May 3); and AT&T Byron Nelson (May 4-10).

Furthermore, the PGA of America has postponed the PGA Championship (May 14-17) for a date later this year, to be announced. Also announced today, the USGA is currently holding the dates for the 2020 U.S. Open at Winged Foot Golf Club as scheduled (June 18-21) but will, as all of us are, continue to monitor the developing situation and follow recommendations by government authorities.

The date “to be announced” later this year may wind up being quite late indeed, as the COVID-19 outbreak is particularly severe in San Francisco. Six Bay Area counties, including the county of San Francisco, announced a shelter-in-place order for three weeks Monday, the strictest measure yet in the U.S., and other counties in the area have since joined them. And the Bay Area has California’s largest clusters of the virus. So it could be a long while before that area is ready to host an event like this. But PGA of America CEO Seth Waugh told Golf Digest‘s Brian Wacker Tuesday the plan is still to keep the PGA Championship in San Francisco if possible:

“Throughout our evaluation process, we have been committed to following the guidance of public health authorities and given the coronavirus shelter-in-place order in effect in San Francisco, postponement is the best decision for all involved,” said PGA of America CEO Seth Waugh.

…Waugh did not specify when the PGA Championship might be rescheduled, but noted in the PGA of America release: “We are and have been working in concert with Commissioner Jay Monahan and our partners and friends at the PGA Tour to find an alternative date that works for all. We are all very hopeful for a great outcome.

“We are also in dialogue with Mayor [London] Breed and her team at the City of San Francisco and look forward to hopefully bringing the 2020 PGA Championship to TPC Harding Park at a date this summer when it is once again safe and responsible to do so.”

Another event that received some discussion Tuesday was the Ryder Cup, currently set for Sept. 25-27 at Whistling Straits in Wisconsin. For example, James Corrigan of London’s The Telegraph wrote Tuesday that the event was “expected to be postponed until next year, with the golf authorities rapidly reaching the decision that their most lucrative spectacle should not be jammed into a schedule that is contracting by the week due to the coronavirus crisis.” However, the US Ryder Cup team disputed that on Twitter, and the PGA of America retweeted them:

Reports today that the 2020 @RyderCup is expected to be postponed are inaccurate.

Of course, that doesn’t necessarily mean the Ryder Cup will proceed as scheduled. Plenty of events have been going ahead until they’re not, including the Players’ Championship and several UFC fights that initially saw plans to go on despite the crisis, with UFC president Dana White saying “only a total shutdown of the country” would stop those cards. And those reports may be inaccurate at this time (maybe the decision to postpone the Ryder Cup hasn’t yet been made), but that decision could be made later. For now, though, the next few months of PGA Tour golf are canceled or moved back, and the Ryder Cup may well follow.