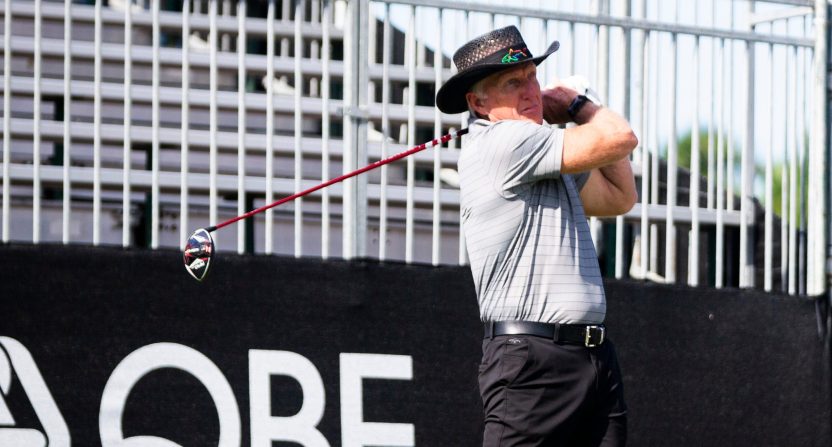 There will be no cooperation between the PGA Tour and LIV Golf, at least for now.

LIV Golf — which is backed by the Saudi government — is set to have its first tournament in London in June. While there was a thought that the PGA Tour might grant a waiver for its players to play in it, Eamon Lynch of Golfweek reported that will not be the case.

“The PGA Tour has denied its members permission to play in the Saudi-funded golf tournament in London next month,” Lynch reported. “The denials were sent to players who had sought permission late Tuesday afternoon…It had been expected that the PGA Tour would grant waivers for the LIV Golf Invitational event near London because of a precedent allowing players limited releases for overseas events. (All members are required to seek a conflicting event release to compete in non-Tour events.)”

This brought several different reactions from fans of golf. Some were happy about the PGA Tour’s decision.

Good. They can go. No longer allowed to play the majors. How is that league a competition. The country just want to wipe their horrible humans rights record away by buying sport. Their doing it in football & all other sports. Disgrace. Players that want to go are washed up anyway https://t.co/yBtRCpn1l6

Huge Flex by PGA Tour Commissioner… And rightfully so.. The antics of Mickelson, Norman and especially now Sergio, proving costly. All they had to do was keep their comments to themselves. https://t.co/FJsrMa8qhU

Others were a little less enthused about the PGA Tour’s stance.

Pretty sure this is illegal. https://t.co/OsJFyunJPL

Ryan Tannehill and the PGA have something in common: They feel insecure and threatened. Yes, I want the PGA to succeed, but I want them to succeed because they’re the best, not because they forbid competition. https://t.co/P0jazSPPHX

I don't watch, but here's hoping all the golfers tell the @PGATOUR to pound sand and go play wherever they want to play https://t.co/7bOHSAzEKD

A more pervasive sentiment is that this is just one element of what will be an ugly fight.

Jay Monahan ready for a fight. Like the hockey player that he is. https://t.co/399y1SwzHZ

Won’t be short of drama in golf this summer anyway 😂 https://t.co/T4tbl7YAjV

this keeps getting spicier https://t.co/aCWh6c44x5

This wouldn’t stop players going to the LIV Golf events. But it would likely stop them ever coming back to the PGA Tour. The real messiness is only just beginning. https://t.co/LtGkcLK4kF

LIV Golf has been a heavy topic of conversation throughout the golf season. Phil Mickelson has previously voiced his displeasure with the PGA Tour, made controversial comments about LIV Golf (and the Saudi government in general), which prompted a long leave of absence that included missing the Masters.

But Mickelson has hardly been alone. Sergio Garcia made a barely veiled reference to LIV Golf after getting an unfavorable ruling during a PGA Tour event. Greg Norman, LIV Golf’s CEO has linked Bubba Watson, though that was later refuted. Other players, such as Brooks Koepka and Dustin Johnson, have been outwardly supportive of the PGA Tour.

This will indeed be a battle and the smart money says that it will not be a short one.