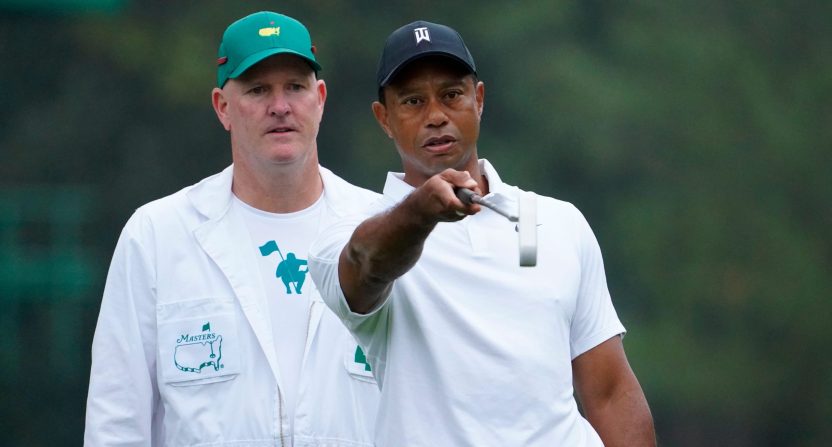 As the LIV Golf drama continues to cause waves in the golf world, many of the PGA Tour’s top players got together on Tuesday to discuss where things go from here. Front and center in that meeting with legendary golfer Tiger Woods, and while those who were present didn’t want to get into details about what was discussed, they did offer some honest thoughts on Woods and his role in the process.

Per ESPN’s Mark Schlabach, many of the top golfers in the world, as well as other “influential players who are still members of the PGA Tour” met with Woods for over three hours in Wilmington, Delaware. On Wednesday, Rory McIlroy briefly discussed what went down in the meeting during his press conference before the start of this week’s BMW Championship.

“I think the one thing that came out of it, which I think was the purpose, is all the top players on this tour are in agreement and alignment of where we should go going forward, and that was awesome,” said McIlroy, who added that specific plans and proposals will remain private for now.

As for the fact that Woods, who turned down a highly lucrative offer from LIV Golf earlier this year, was running point, McIlroy shared some insight into the role the 15-time major champion played.

“I think it’s pretty apparent that whenever we all get in the room, there’s an alpha in there, and it’s not me,” McIlroy said. “I think it shows how much he cares about the players that are coming through and are going to be the next generation. Like it or not, they can’t really sell Tiger Woods anymore. The tour had an easy job for 20 years. They don’t have Tiger. They’ve got a bunch of us and we’re all great players, but we’re not Tiger Woods. We’re moving into a different era, and we just have to think about things a little differently.”

Justin Thomas echoed the sentiment that Woods’ stature carries with it a gravitas that few in the golf world can match.

“I think if someone like him is passionate about it, no offense to all of us, but that’s really all that matters. If he’s not behind something, then one, it’s probably not a good idea in terms of the betterment of the game, but two, it’s just not going to work. He needs to be behind something.”

McIlroy added that Woods needs to use his voice in the golf and pop culture world to amplify the message that the PGA Tour wants out there.

“He is the hero that we’ve all looked up to,” McIlroy said. “His voice carries further than anyone else’s in the game of golf. His role is navigating us to a place where we all think we should be.”