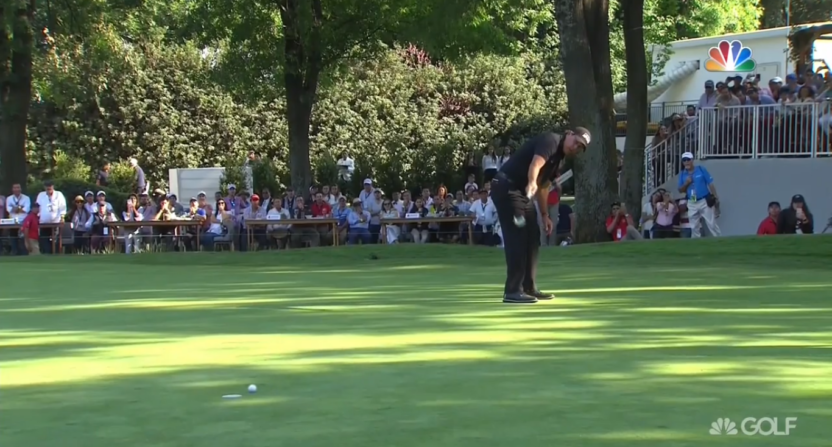 Phil Mickelson hadn’t won since the 2013 Open Championship at Muirfield. For the last few years, the fact that Tiger had actually won more recently than Phil had been one of golf’s more surprising fun facts.

Mickelson started 2018 in tremendous form; his last three finishes (at very solid events) were all inside the top-6: T5 in Phoenix, T2 at Pebble Beach, and a very solid T6 at Riviera. Mickelson took last week off before heading south of the border for the WGC-Mexico Championship. A tier below the majors, the WGC’s are limited field and without a cut, but that limited field is a very strong one.

Phil teed off in the final group today, with a real shot to win; surprisingly, though, his toughest competition came from the other contender for hottest golfer in the world, Justin Thomas.

Thomas was at even par after the first two rounds, not close to contention. But a 62 yesterday put him back in with a chance, and today he closed with a 64, finishing about an hour before Mickelson. Oh, and he finished in style, too:

That eagle helped offset his bogey on 17, and put him two shots clear of Mickelson, who still had five holes to play. Phil was four under through his first ten holes before finding himself in a typical Phil position on the par 5 11th.

Mickelson actually hit a fantastic shot from there, going through a gap in the trees that might not have existed for any other player on tour:

He missed the putt, though, denying us a repeat of last year’s par from the Mexican trees.

His very next drive found the trees and the cart path, leaving him unable to make birdie on what is typically one of the easier holes on the course:

Thomas holed out shortly after, posting the clubhouse lead at -16. Mickelson went to work, with a two-putt birdie on the par 5 15th leading into this lengthy birdie opportunity on the 16th:

That put him into a tie for the lead with two holes remaining; he parred the 17th, and as the final group headed to 18, there was actually a three-way bunch at the top, with Mickelson’s playing partner Tyrell Hatton at -16 as well. He made a mess of the final hole, though, laying well back off the tee, missing the green right, then hacking his flop attempt over the flag, leading to a bogey when par would have gotten him into the playoff.

Mickelson wasn’t much better, to be honest; he had 108 yards from the middle of the fairway, with birdie to win. That’s typically prime Mickelson territory, but he left his approach well short, leaving himself needing two putts from 36 feet, across a ridge, to force a playoff with Thomas. His lag effort wasn’t tremendous, meaning he had a bit of work left, certainly more than you’d like to have when you’re looking to end a 4+ year victory drought:

That clutch make negated what Dan Hicks had said after Thomas’s hole out, which he called “One of the spectacular endings in the history of the game!” (Though Hicks did couch it by noting the tournament wasn’t over yet, it’s also important to note that typically “ending” requires a moment to occur, you know, at the end of something, not with an hour of golf remaining.)

As Thomas and Mickelson headed to the 17th tee to start their playoff, their exchange was revealing.

Maybe it’s reading a bit too much into it, but their demeanor seemed similar. That’s not necessarily what you’d expect when comparing the 47-year-old Mickelson to the 24-year-old Thomas, especially given Phil’s career. He’s already in the Hall of Fame. He’s already won majors. But he clearly wanted to win this tournament. He wasn’t just coasting into the playoff.

That set up Mickelson’s dialed tee shot to the par 3:

Thomas had missed the green, and as the two players prepared for their second shots, a cameraman came out of nowhere and almost trampled on Thomas’s ball. Thomas had to dig into his Crimson Tide roots and throw a bit of a stiff-arm:

Thomas’s lie was bad, though, and as the broadcast (and Thomas himself, after the round) noted, he may have been better off letting the rando trample it. He’d have received a drop, and his chip may have been easier. As it was, he was left with a slider from eight feet or so.

Phil, though, didn’t want to leave it up to Thomas, leading to this attempt for birdie:

Still not sure how that didn’t go in. It looked perfect, and caught the lip on the higher side of the hole. Typically that’s enough. As it was, Mickelson tapped in, leaving Thomas with a chance to extend the playoff:

And that was it. Mickelson, at 47, picked up his 43rd PGA Tour victory, a just reward for how well he’s played to start the season. Mickelson’s longevity is something that is, if anything, overlooked; his peak was never close to Tiger’s (of course, no one’s peak was or will be close to Tiger’s), and he’s never been ranked #1 in the world. But Mickelson hasn’t fallen out of the top 50 in the world since 1993. That’s astonishing; essentially 25 years at the top of the game, a game that has evolved an incredible amount over that time span.

As excited as everyone has been about a potential return to relevance for Tiger, let’s not forget what Phil’s doing. It’s more impressive; at this point, he’s playing some of the best golf on the planet.

The Masters is going to be lit.