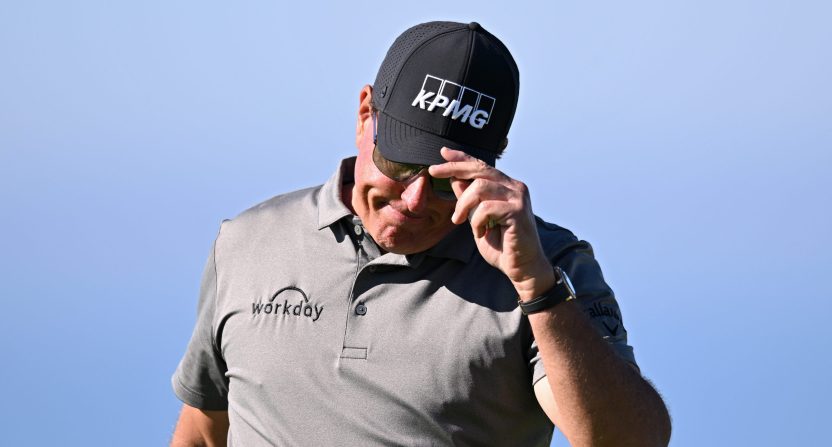 Phil Mickelson has been making a lot of headlines for things other than playing golf in recent months. That continues to be the case as Lefty is now making headlines once more for a decision not to play golf.

Golf Digest confirmed on Monday evening that Mickelson, who has been on a leave of absence from the PGA, won’t be participating in the 2022 Masters. This confirms what many have been thinking since it was noticed that his name appeared on the “Past Champions Not Playing” section on the official Masters’ website.

Augusta National has confirmed that Phil Mickelson will not compete in the 2022 Masters.

The 51-year-old, who has won the Masters on three occasions, has been on a leave from the PGA since controversial comments about why he and other PGA golfers should leave the organization to join a Saudi-backed league that would reportedly pay them more. Some particularly tasteless comments painted him as greedy and self-serving and were met with criticism from the public and fellow golfers alike. Phil has since apologized for prior statements, but in his apology, Mickelson maintained that “golf desperately needs change, and real change is always preceded by disruption.”

When Tiger Woods surprisingly topped Phil to win the Player Impact Program, there was a lot of schadenfreude amongst the golf world.

According to Augusta National, Phil Mickelson notified the club that he won't be playing in this year's Masters

It’s a big deal for someone like Lefty to miss the Masters. It’s akin to an NFL player deciding to skip the Super Bowl in a way, so it’s probably not a move that was made lightly.

The move had a lot of people around the golf world reacting strongly regarding Mickelson, his recent comments, and his reputation.

Phil Mickelson has played in every single Masters since I was born. Damn. https://t.co/RW3lxCeirR

This is sure to be a hot-button topic the week of the 2022 Masters and it will also be interesting to see when, exactly, Lefty will return to the PGA world. That will bring with it a whole fresh round of attention as well.