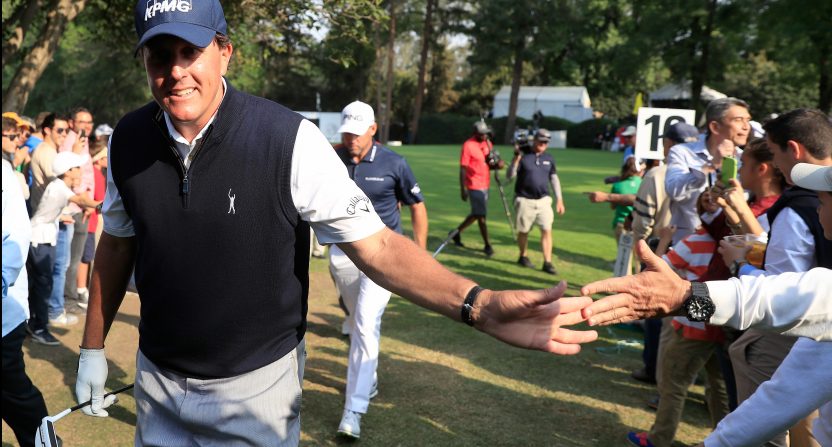 Phil Mickelson has won every major in golf except for the U.S. Open. He’s finished at least tied for second six times, which is a record, but it feels like his chance to actually win one disappeared a while ago.

If forced to pinpoint an exact moment, it was on the 13th hole of the final round in 2013, when Mickelson made a mistake off the tee on the short par 3, leading to a costly bogey from which he couldn’t recover. He finished T2 that year, his last finish higher than T18 in a U.S. Open.

Mickelson is now 50. He’ll turn 51 the day before the first round of the 2021 championship at Torrey Pines on the coast of Southern California. Mickelson is currently 116th in the world, and had no path to the Open beyond entering sectional qualifying. That hadn’t been the case since 1993 (Mickelson was eligible at Erin Hills in 2017 but skipped it for his daughter’s graduation). He’d been in the top-50 in the world rankings for two decades, and almost always had a way in the field beyond that, too. Not this time, though.

The USGA offers the occasional special exemption to players not otherwise eligible. It’s typically reserved for legends of the game or past U.S. Open champions. Jack Nicklaus and Arnold Palmer each received several. Ernie Els and Vijay Singh have been recipients.

They’re not just charity available for anyone, though. Wisconsin native Steve Stricker asked for one ahead of the Open’s trip to his home state in 2017, but was denied. (Stricker ended up qualifying and finishing T16, a finish I didn’t expect after seeing how tired he looked when I saw him at a Five Guys in Delafield, Wisconsin after his opening round 73.)

Still, with Mickelson’s stature in the game, his history at the event, and the fact that Torrey Pines is as close to a hometown return for Phil as the Open is likely to offer (Mickelson grew up in San Diego), and an exemption offer felt very likely. A few weeks ago, Mickelson addressed the possibility, and said he wasn’t sure if he’d take it should the USGA offer, not wanting the handout. Fortunately, when actually presented with it, he said yes. The USGA announced today that Mickelson will indeed be in the field at Torrey:

“Phil Mickelson’s incredible USGA playing record and overall career achievements are among the most noteworthy in the game’s history,” said USGA CEO Mike Davis. “We are thrilled to welcome him to this year’s U.S. Open at Torrey Pines.”

“Winning the U.S. Open has been a lifelong and elusive dream, and I’ve come close so many times,” said Mickelson, a San Diego native. “You can’t win if you don’t play. I’m honored and appreciative of the USGA for the opportunity and look forward to playing in my hometown on a golf course I grew up on.”

It’s actually a bit surprising that this was offered, considering the runs Phil has taken at the sport’s governing body over the years. It was only 2018, too, when he pulled the “putt the moving ball” trick in protest of green speeds at Shinnecock.

But Mickelson is an inner circle hall of fame player, however, and he’s also one of the most successful U.S. Open players of all time, despite never taking home a win. He’d probably trade all of his seconds for one first, but it’s undeniable how big a role he’s played in the championship over the past quarter century, going back to his T4 finish in 1995.

Had he been blessed with just a touch of good fortune, instead of the opposite, he could have 3-4 wins. Which is nuts but actually true. https://t.co/Tuox870imE

There’s a chance that this ends up Phil’s final U.S. Open appearance. He might treat it that way. He could of course spring back up with a hot streak at some point that gets him into the event, or elect to try to qualify for a future version. But there might be something appealing about going out on his own terms, too. A home game at Torrey and a chance to know that it’s his final appearance at the event he desperately wanted to win (and that tortured him most) might be Phil’s decision.

Still, it’s better for the game that he’s playing that week. Good for the USGA for offering and good for Phil for accepting rather than try to make some inscrutable, self-defeating point.