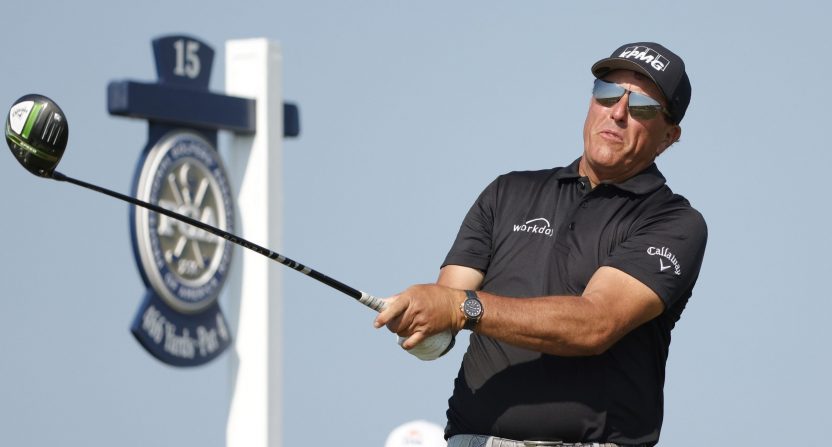 Phil Mickelson is, at time of writing, leading the PGA Championship by a shot.

More importantly for his championship hopes, he’s finished with his second round, meaning he gets to sit and watch the rest of the field battle the swelling winds at Kiawah Island’s Ocean Course. Being in the clubhouse as the wind picks up on a Friday afternoon is absolutely the best place to be; being there with the lead is even better.

This is certainly a development executives at ESPN and CBS are excited about, especially if Phil can stay at the top of the board heading into Sunday. The chasing pack is a strong one, too; Brooks Koepka and Bryson DeChambeau are both in the hunt as of Friday afternoon, though they have a long way to go and some very tough holes remaining.

Mickelson, though, remains one of the biggest draws in golf. Maybe the biggest, considering Tiger Woods is likely not going to return to competition any time soon. Mickelson is 50 now, though, and had been showing the expected signs of age. Now ranked 115th in the world, Mickelson accepted a special invitation to play the US Open at Torrey Pines (he’d have had to qualify for it otherwise), the sort of thing that tends to signal major contention is behind a player.

Of course, being 50 is in itself one of those signs; the oldest men’s major champion was 48, and that was all the way back in 1948.  The oldest major winner in the last thirty years: Tiger, who was 43 when he won the 2019 Masters. (Though given Patrick Reed’s personal history, we can’t know for sure that he was only 27 when he won the 2018 Masters.)

Mickelson hasn’t even really showed signs of this; he opened with a great round at Quail Hollow last week, only to falter almost immediately and finish 69th. He has just one finish inside the top 20 since February 2020 (aside from winning a few Champions Tour events.)

But when Tom Watson popped up at the Open in 2009, no one expected that, either. Mickelson winning at 50 would be one of the more incredible stories in sports, and it would offer the kind of career bookend that would be fitting for him. In 2016, he played one of the best major tournaments in golf history at the Open, but he ran into Henrik Stenson who played an even better one.

Mickelson spent three decades in the top 50 of the world rankings, which is just astounding. His longevity has been such that he often sort of gets lumped in with other careers marked by longevity instead of peak, which undersells just how dominant he’s been at times; he never reached #1 in the world, but there were still stretches where he was very clearly the best player in golf, no matter what a flawed ranking system said.

Phil could absolutely collapse tomorrow and end this conversation. Or he could collapse in more spectacular fashion on Sunday afternoon, which would be memorable in its own way, as Watson’s defeat was. But taking one more run at a major in an era that many thought had passed Phil by is a hell of a story, no matter what ends up happening.