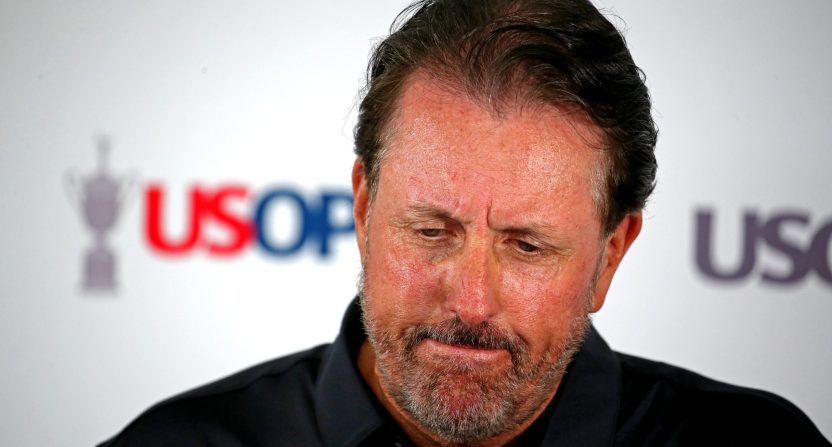 Earlier this year, Phil Mickelson was one of the first big-name stars to defect from the PGA Tour and join LIV Golf as the league poached some world’s top golfers with lucrative guaranteed-money contracts. Mickelson also made waves as one of the eleven golfers to file an antitrust suit against the PGA Tour – but in a wild turn of events, it looks like Mickelson has dropped out of the suit.

According to ESPN, Mickelson has removed his name from the antitrust suit along with fellow LIV Golf athletes Talor Gooch, Ian Poulter and Hudson Swafford.

While it is a sudden change, it’s not completely unexpected. Mickelson revealed earlier this month that he was considering removing himself from the suit after LIV Golf joined the case itself. With LIV joining the case, Mickelson said it was “no longer necessary” for him to be in the suit.

The four players aren’t the first to remove their names from the lawsuit. Last month, Pat Perez dropped out of the suit, saying he “didn’t think it through.” Jason Kokrak, Carlos Ortiz and Abraham Ancer have also removed their names, leaving just Bryson DeChambeau, Matt Jones and Peter Uihlein as the only remaining plaintiffs in the case, along with LIV Golf.

Even though most of the league’s individual golfers have removed their names from the suit, LIV Golf will continue the court battle itself.

“Nothing has changed,” LIV Golf spokesman Jonathan Grella told ESPN. “The merits of the case–the PGA Tour’s anti-competitive conduct–still stand and will be fully tested in court. And we look forward to that. LIV stands with the players whom the PGA Tour has treated so poorly, but we also recognize that to be successful, we no longer need a wide array of players to be on the suit. We have our players’ backs and will press our case against the PGA Tour’s anti-competitive behavior.”