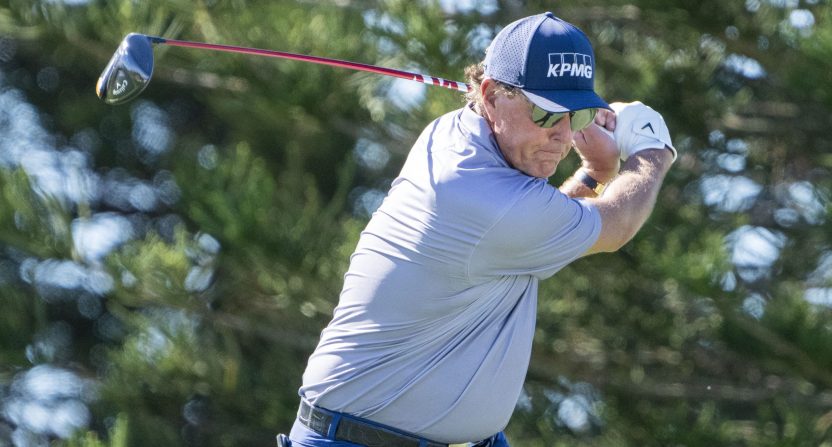 If officials at the upcoming PGA Championship were worried that the presence of Phil Mickelson would create a “circus,” they no longer have to be concerned.

The PGA released a statement on Friday saying that Mickelson will not be at Southern Hills to defend his championship.

The timing of this announcement is notable. In addition to being less than a week away from the start of the PGA Championship, it’s only days after the PGA Tour announced that it would not allow its members to play in the Saudi-backed LIV League’s first event. Mickelson has been a vocal critic of the PGA Tour and had applied to play in that LIV event as well as the PGA Championship.

Fans of golf had a range of emotions on the Mickelson news.

Wow. Hard to see where Phil Mickelson returns to “real” golf now. The PGA Championship gave him cover as the defending champion, and without the PGA Tour running the event.

Hey golf, be careful. Sincerely, A Guy Who Covered the Indy 500 Split https://t.co/zeTLKpNgxS

And this all but confirms to me that we’ll never see @PhilMickelson on the PGA Tour again https://t.co/Dg4VqJhMTk

“look forward to his return to golf” is 𝒔𝒂𝒗𝒂𝒈𝒆 https://t.co/RKTlrq0Wec

This is the equivalent of deciding not to defend a Super Bowl title because you could go make “more money” playing in the Canadian Football League.

Phil just taking a blowtorch to his legacy at this point. https://t.co/zxqsUM78vT

Lefty had one of the most legendary majors wins & now won’t even show to defend. He not wanna answer the big Js questions? He suspended? Regardless – it’s a pretty sad situation https://t.co/BJ7mN931oS

This whole saga has been massively disappointing and ultimately very, very sad. Now circles to a point where an incredible feel good story from 2021 has this aftertaste. https://t.co/AK2IJem63L

The PGA Championship withdrawal begs a simple question. What’s next for Lefty?

Mickelson has not played since the Famers Insurance Open, which was held in January. Since then, he’s blasted the PGA Tour and spoke openly of his interest in the LIV League. Mickelson also made a number of controversial comments about the Saudis — though he’s not the only one to do that. The comments prompted Mickelson to take an extended hiatus from the course.

And with the news that he won’t be defending his 2021 PGA Championship win, it is fair to wonder when, or even if, we’ll see Mickelson on the PGA Tour again.