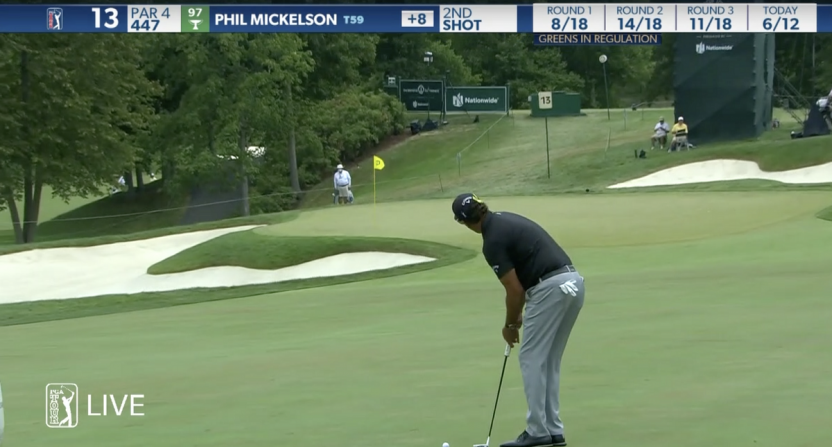 Phil Mickelson’s entire brand at this point is trying to pull off crazy shit and succeeding often enough that it feels impossible.

During very difficult conditions today at the final round of the Memorial, Phil did something that was fairly shocking even by his standards: pulling out putter in the fairway from 78 yards away. Just looking at him setting up for it feels like someone cycling through the clubs on a video game and accidentally skipping past the wedges to the putter.

Here’s how it went:

It’s hard to say what the best part of that thirty-second clip is; Phil’s “I saw that playing out differently in my mind” is a contender, but that he then ended up pulling off a ridiculous flop shot and making a par anyway is incredible. After the round, here’s what Phil said about it:

“So the reason I tried to putt was the fairway prior to the green was pitched more severely right to left, and if I used that slope it was going to angle and get the ball working over to the left pin and possibly get close, whereas if I hit a wedge shot and flew it on to the front edge or just short, it wasn’t using that extra pitch or contour to get the ball over to the left. I would have had to settle for a good shot being 12 or 15 right of the hole. I didn’t hit it hard enough, but if I had hit that hard enough or the right speed, I think that ball could have gotten close to the hole to a tap-in, whereas a wedge I didn’t see that being possible.”

Later in the round, Mickelson laid up off the tee on a par 3, prompting even more debate about whether he was truly playing for the lowest score in these instances or whether he was instead offering a protest of sorts against the tough setup at Jack Nicklaus’s Muirfield Village course.

Phil just LAID UP from 173 yards on the par-3 16th pic.twitter.com/nZwkvhA7Qd

Mickelson again offered an explanation, noting that he was playing for a 4 there and taking a bigger number out of play:

“So yeah, 16 is a hard hole. I played it eight days. I’m 10-over. So I improved my score .2 today by playing for a 4, and I’ve made four or five doubles on the hole, and it just is a hard golf hole for me. Obviously you can’t go left in the water, and when I go right, usually it’s a hotter shot like I pull it or it draws and it’s always on the downslope of the bunker, and I just can’t stop it oftentimes on the green. So I just laid up to where I have an angle to putt it up the green, so I took a 5 out of play and I was trying to make a 3 and had a 12-footer for it.”

As a longtime advocate of the “par is irrelevant” mindset, I can see where he’s coming from here. Just because a hole is short doesn’t necessarily mean players are entitled to a birdie putt. But Mickelson expounded on his thoughts on the course design and setup and it felt a bit more tonge-in-cheek, just from the transcript alone.

Q.I overheard you saying this is a good opportunity to make some of the changes to the golf course to make it even better. Any areas in particular that you’d like to see?

PHIL MICKELSON: No, I mean, not really. Jack will probably see it. He’s such a brilliant designer, and he’s done such a great job with his designs. When you look at a hole like 13 and you make it firm and fast and you let the player create a shot by using that fairway short of the green to get to those left pins as opposed to the only shot that oftentimes you’ll have, which is to fly it over the bunker and stop it, and when it’s hard like this you can’t do it, that shot you get to use the ground to get of get to that pin if you see it. That to me is like a design brilliance, and there’s a lot of those out here on this golf course. And there’s some holes that might not be as great, and if you get to see it when it’s firm and fast like this and the best players are playing it, I think when he comes back and touches it up, I think this course is going to be even better, and it’s already great.

The opportunity Phil is referring to is Muirfield Village shutting down for a complete teardown after this week. That’s one of the reasons the course setup has been pushed to the limit for this week’s event after playing fairly easily last week (the PGA Tour set up a bubble of sorts, hosting two events in a row here.) It’s actually been a perfect illustration about how course setup, soft vs. firm, rough length, and some different weather can really impact the scores, even from the top players in the world playing the same course just two weeks apart.

Mickelson, though, has a history of pulling stunts to protest what he feels are unfair practices, perhaps most notably at the 2018 U.S. Open when he ran around to hit a moving putt back towards the hole before it could roll off the front of the green.

So when Phil does something like try to putt from 78 yards and then after calls it “design brilliance”, it’s hard to know whether he’s being serious or not. Then again, at this point, that’s pretty much the question for everything he does, from the aviators to the coffee fasts to the social media presence.

It’s not boring though!