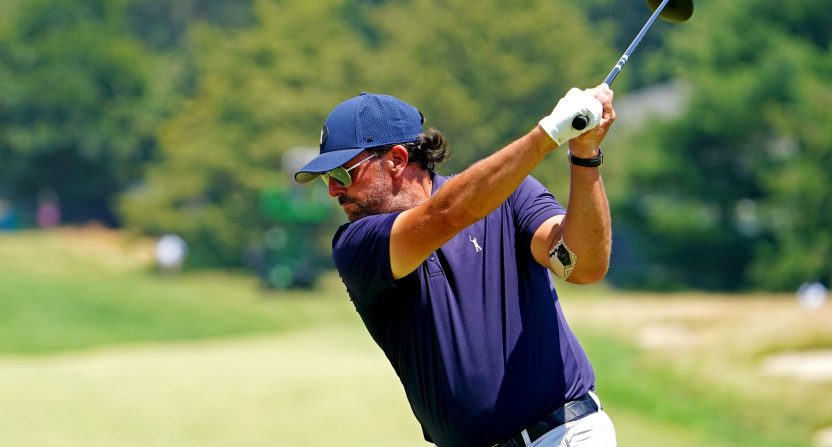 While Phil Mickelson was one of the major stories of the week heading into the U.S. Open, the weekend will be a different story.

Mickelson shot a three-over par round of 73 in his second round on Friday. While that was markedly better than his opening round 78, it was nowhere near good enough to make the cut. In fact, it was one of the worst majors of his career.

At the 2021 U.S. Open, Mickelson was coming off of an improbable win at the PGA Championship. While he wasn’t the favorite in the tournament, he was certainly the favorite of the galleries. But a lot has changed over the last year.

There was one obvious joke to make.

Phil missed the cut? He must be LIVid. https://t.co/UNBBPauirI

He must be LIVid https://t.co/CZMcLbbfDd

Indeed, Mickelson’s decision to join the Saudi-backed LIV Golf League has earned him a lot of criticism. And because of that, Lefty’s rough 36 holes at Brookline garnered essentially no sympathy.

Put that bum @PhilMickelson on the first flight to Saudi. pic.twitter.com/HRTwjWqPqQ

Phil Mickelson looking for his check after missing the cut at the U.S. Open pic.twitter.com/zb1cFN6iiE

Phil Mickelson shot 11 over par…. he is a "has been" and the Saudi's can have him! He will quickly lose the $200Million in gambling ventures. I won't miss him.@PhilMickelson

Maybe Phil Mickelson likes LIV Golf because it means he'll get to play more than 36 holes? Why does everyone always have to assume it's a money thing?

Unless the governing bodies over the majors take some action against LIV League golfers, this is something that may persist for a while.

Some of the other LIV golfers may have obstacles in qualifying for majors, depending on how those events are factored into the World Golf Rankings. But as a past champion Mickelson has lifelong exemptions to both the Masters and PGA Championship. He’s qualified at the British Open through 2030, as all Open Champions 60 or younger are eligible. Meanwhile, his 2021 PGA Championship victory earned Mickelson a five-year exemption at the U.S. Open.

But while Mickelson may not be going anywhere in majors, the bad feelings against him aren’t going away any time soon, either. So, we can expect more of the same if he continues to struggle at future major championships.