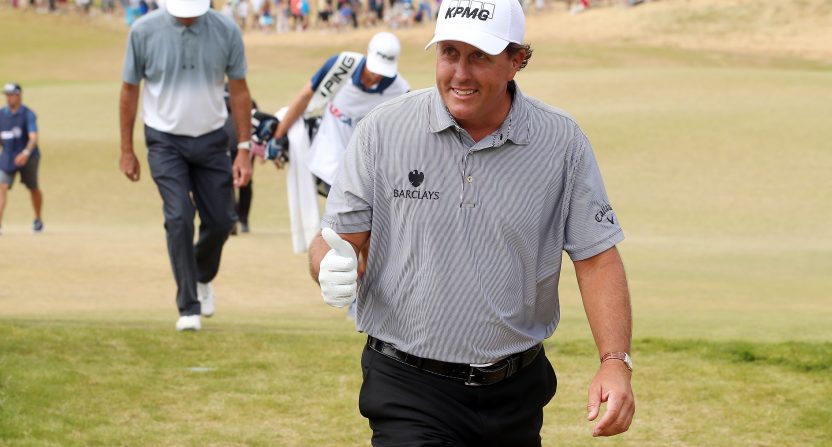 Golf fans have been wondering when they’ll see Phil Mickelson hit the links again. Not only does it sound like we’ll see him back on a golf course soon, but he’s also been sighted working on his swing.

Mickelson hasn’t competed in a PGA Tour event since the Farmers Insurance Open in January and missed his first Masters Tournament since 1994 following disturbing comments about human rights violations in Saudi Arabia. Along with losing some notable sponsors, he decided to take a break from golf and the public eye.

Along with applying to play in the U.S. Open, Mickelson also recently applied to play in the first LIV Golf event series in London as well as the PGA Championship. It remains to be seen if the PGA will give him an allowance to play in the LIV tournament since they previously said they wouldn’t allow someone to do both.

While we wait to find out which tournaments Lefty will play in, video of him at the Rancho Santa Fe Golf Club in California shows that he’s still out there taking cuts and getting ready.

Rumors of Phil Mickelson’s demise have been greatly exaggerated. He had plenty of speed yesterday at Rancho Santa Fe Golf Club. pic.twitter.com/N3NhqwEA6v

The clip garnered some interesting reactions from the golf world.

I can’t stop watching…. He gets so far past parallel with that club head. https://t.co/e4yb1YsCKv

Phil had become golf’s Yetti – nice to see him back on the course again. Next stop Southern Hills? https://t.co/r76DlkUajE