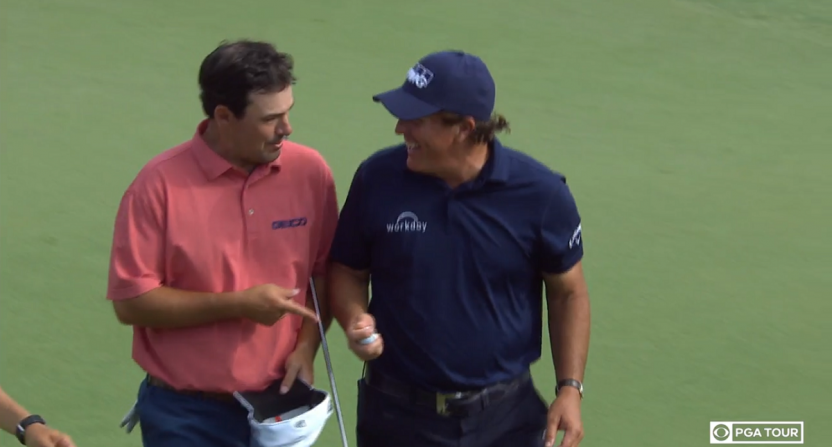 The PGA Tour is at the very difficult Quail Hollow this week for the Wells Fargo Championship. The North Carolina course finishes with a closing stretch nicknamed The Green Mile, for obvious reasons.

Phil Mickelson was on his way to a top-5 finish, but as he stood in the fairway on 18, he wasn’t entirely eliminated from contention, even though he was a few shots off the lead. A birdie would have given him the clubhouse lead at -8, and Mickelson cares a lot more about going for wins now than he does the difference between a T5 and a T8, so he was always going to take an aggressive line.

Unfortunately, as is Phil’s wont, he ended up in an unenviable position:

Nantz was absolutely disgusted with that “that’s what you call live streaming” pun. So good!

He’s been cracking that joke all week. I guess it’s hilarious if you are over 60 and aren’t to sure what streaming is

But, because it’s Phil, he wasn’t going to let a few rocks and some water stand in the way of attempting a hero shot.

That’s about as good as you can hope for from that spot, but it still left a 20 foot par putt down a slippery slope.

Phil drops the putter like the mic there after the make, which is just too perfect. But it got better from there, as playing partner Johnson Wagner went back for some extra congratulations after their handshake.

Phil excitedly describing the rocks the ball had been sitting on is awesome. But Wagner then pointing and asking for the ball as a keepsake is just as good, and really fun to see. Mickelson is already a hall of fame player (literally, he’s in there), and it’s a nice reminder that his fellow players are aware of that too. (Also, note Faldo’s “There’s the stream.”)

As for the tournament altogether, Jason Day ended up winning, in large part thanks to this ridiculous tee shot on the par 3 17th:

That was only the third birdie of the day on that hole, and while you could certainly argue that Day was lucky that the ball didn’t end up off the back of the green, he still did hit it right at the flag, and it could just as easily have gone in.

But Phil’s antics on 18 were a highlight of the day as well, and with the way he’s playing right now (a win and five other top-six finishes this season) it’s possible we’ll get to see plenty more, which we shouldn’t take for granted given the late stage of his career. Golf’s much better with him than without.