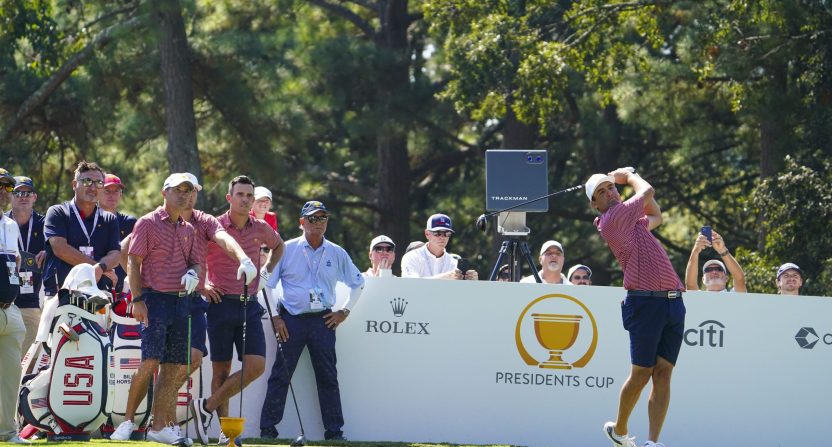 Some of the best golfers in the world will be in action this week at Quail Hollow Club in Charlotte, North Carolina for the 2022 Presidents Cup. This event was originally planned for 2021, but the COVID-19 pandemic forced the 2020 Ryder Cup to be moved back a year. With that, the Presidents Cup was, as well.

The Americans will come in as the defending champions, having earned a 16-14 victory at the 2019 Presidents Cup at Royal Melbourne in Australia. While that event had a similar ending to most Presidents Cups in the past, it had a dramatically different feel to it.

What is the history of this event? Who will we see this week and how can we see them? How is this event different from regular PGA Tour events that you might see during the season?

We answer those questions and more in this 2022 Presidents Cup primer, which will be helpful for longtime golf fans and newcomers, alike.

How to watch it

All times are EST. All four days will also be streamed on Peacock.

The Presidents Cup is broken up into 30 matches. Every match is contested for one point. In the event of a halve, each side will be awarded one-half point. The schedule is as follows.

Foursomes: 2-on-2, frequently known as alternate shot. Player 1 on Team A will tee off, Player B will hit the second shot. The two will continue to alternate until the hole is completed.

Singles: 12 1-on-1 matches. Sunday singles is the only individual session in the Presidents Cup where all 24 players are in action.

Who are the important people this week?

How is match play than normal events?

Most events contested on the PGA Tour (and every other tour) are stroke play. The standard tournament is four 18-hole rounds. After 36 holes, there is a cut. The players who miss the cut go home and the players who make it play the final 36 holes. Of the players who make the cut, the one that finishes 72 holes with the lowest score wins.

While there are three different formats used at the Presidents Cup, all are match play. In match play, you’re competing for holes, not strokes.

Another critical distinction in match play is that holes do not need always need to be finished. Frequently, if a player hits a shot that finishes within 2-3 feet of the hole, that putt will be conceded. If a Player/Team A is having a disastrous hole while Player/Team B is doing well, Player/Team A may concede the hole before even getting to the green.

Also, since the players and teams are competing for holes rather than strokes, matches frequently end before the 18th hole. If Team/Player A is up by four holes after the 15th hole is completed, the match is over.

How have the first 13 Presidents Cups gone?

Generally speaking, very well for the American side. The United States has an overall record of 11-1-1 in the Presidents Cup. That includes a victory in each of the last eight events. Furthermore, the Americans have a perfect 7-0 mark in their home Presidents Cups, with all but one of those (a 16.5-15.5 victory in 1996) being decided by three points or more.

In 2017 — the most recent Presidents Cup held stateside — the Americans led 14.5-3.5 heading into the Sunday singles session. They needed only one full point to clinch victory. The Internationals did relatively well for themselves on that Sunday, winning the session. But the Americans cruised to an anticlimactic 19-11 victory.

How is this one different than the previous 13?

Golfers who joined the Saudi-backed LIV Golf League are ineligible for PGA Tour events. The PGA Tour doesn’t preside over any of the four majors so, as of now, those golfers can play in those events — much to the chagrin of the American captain. But the Presidents Cup? Not so much.

The International side has been rocked by this. Cameron Smith and Joaquín Niemann were the first and fourth highest qualifiers, respectively, for the International Team. Both joined LIV Golf and as such, neither is eligible.

All of the automatic qualifiers on the American side are eligible to play (though Will Zalatoris is out with an injury). Still, we can’t say that LIV hasn’t hurt the American roster, either. Odds are, if LIV Golf didn’t exist, we’d probably be seeing Dustin Johnson and Brooks Koepka at Quail Hollow.

What can the International team lean on to turn things around?

While the American team routed the International squad in the most recent Presidents Cup held stateside, the 2019 event at Australia’s Royal Melbourne was a narrow 16-14 victory. So, the rookies have nothing to do with the negative history while the returning players know that they can hang close with the American team.

What will Quail Hollow have to offer?

Because it was a recent regular tour stop, Quail Hollow shown be well known to the players at the Presidents Cup. Still, it will be a little different.

Which team holds the edge?

The Americans, and it’s not close.

Heading into the week, Matsuyama is the top-ranked player on the International team, sitting at No. 17 in the Official World Golf Rankings. The only American players ranked below him are Young and Kisner, who are No. 18 and No. 25, respectively. In addition to having every player on the American roster ranked inside of the top 25, six are in the top 10.

The Americans also hold an experience edge. While the Americans do have six Presidents Cup rookies, two of them (Scheffler and Morikawa) were on the 2021 Ryder Cup team and played well, going 3-0-1 and 2-0-1, respectively. So, eight of the 12 Americans are familiar with match play and the team formats.

Immelman has his work cut out for him. He’s going to need to find the pairings that work best together and stick with them through the foursomes and four-ball sessions. Immelman will also need to identify his best players within the week. Those are not always the highest-ranked players.

Those challenges await Love, as well. But given his team’s vast edge in experience and in the world rankings, he has more margin for error.

Ultimately, the International team needs a lot to go right to come away with a win at Quail Hollow. Part of that formula will include multiple American players playing well below their expectations. It’s hard to imagine that happening.

This may not be the complete beatdown that we saw in 2017 but the Americans have a significant edge here. Because of that, we’ll say that the United States team will win, 17-13.