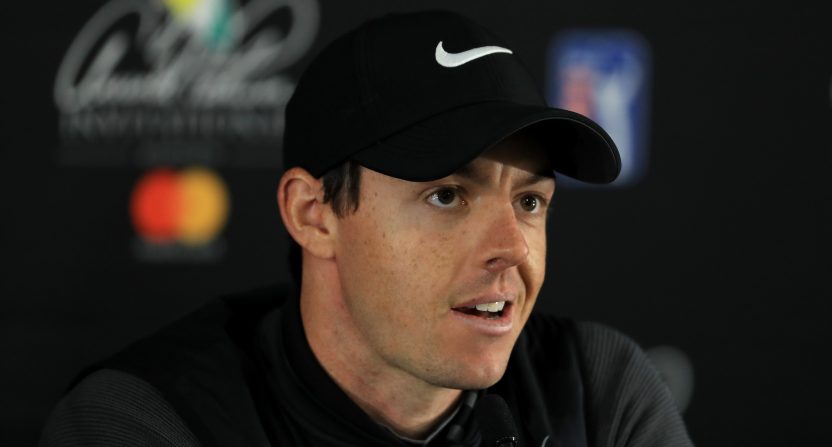 Scotland’s Muirfield has hosted the British Open 16 times. A private links course, that ranks second among courses to have hosted the Open in the modern era, trailing only Old Course at St. Andrews.

Muirfield last hosted the Open in 2013, serving as the setting for one of Phil Mickelson’s greatest triumphs. After that Open, though, the R&A made it known that they weren’t pleased with Muirfield’s policy of only allowing male members. In May of 2016, the club voted on this membership issue, and failed to overturn the policy.

In the wake of that, Muirfield was removed from the Open rotation.

Faced with actual consequences, the club hastily decided to vote again on the issue. That second round of balloting just took place, and the club agreed to allow for female members. (Though it was far from unanimous.)

In response, the R&A immediately announced that Muirfield would be back in the rota for a future Open, though as of now, that couldn’t happen until 2021 at the earliest, as other venues have already been chosen through 2020.

R&A chief executive Martin Slumbers said the club would now be reinstated as an Open venue.

“It is extremely important for us in staging one of the world’s great sporting events that women can become members at all our host clubs. Muirfield is a truly outstanding Open venue and we very much look forward to taking the championship there in future,” he said.

And in a much more entertaining response, Rory McIlroy put the club and course on blast at his Wednesday presser:

Full comments from Rory today re: Muirfield vote and status in Open rota. As always, he doesn't pull any punches. pic.twitter.com/9z0nkbmk5d

“I mean, it’s obscene. Like it’s ridiculous. So they sort of saw sense. I still think that it got to the stage, this stage, is horrendous. And yeah, I mean, we’ll go back and we’ll play The Open Championship, because they will let women members in, but every time I go to Muirfield now I won’t have a great taste in my mouth.”

Rory has established himself as one of the least-filtered superstar athletes in the world, which is a welcoming trend. He’s been criticized for that, mostly due to the sport he plays; some in the golf media prefer a bit more mystique to the great players, as if humanity is an inherent detriment to greatness. (Tiger’s success is likely to blame there, as it is for so much wrong with golf analysis.)

McIlroy has also been under fire recently for his decision to play a round with Donald Trump at the President’s request, which is another example of the fine line professional athletes must walk these days.

So, when will the first woman tee it up at Muirfield as a full member of the club? Well, about that:

While the change to admit women members takes effect immediately, the club admits it is likely to be at least two years before the first woman successfully negotiates its lengthy joining process.

Augusta National went through this exact battle for a very long time, until finally admitting female members in 2012. That wasn’t without incident; the Masters actually went commercial-free for two straight years (2003 and 2004) as sponsors were shaky about backlash in the middle of membership policy protests. But Augusta runs the tournament, and sells the rights; they had leverage Muirfield didn’t. (And, it should be said, did end up admitting female members well in advance of Muirfield, though certainly far too late overall.)

There are still multiple clubs in the United States that refuse to allow female members, preventing them from hosting USGA events, including Chicago’s Butler National, often cited as a potential U.S. Open venue if not for their proudly regressive policies. (How regressive? Butler National doesn’t allow women on the property. Not just for golf. At all.)

Golf is in many ways the last vestige of a variety of old thinking. That has to change if it’s going to survive and grow.

Having more professional stars like Rory is a good way to start.