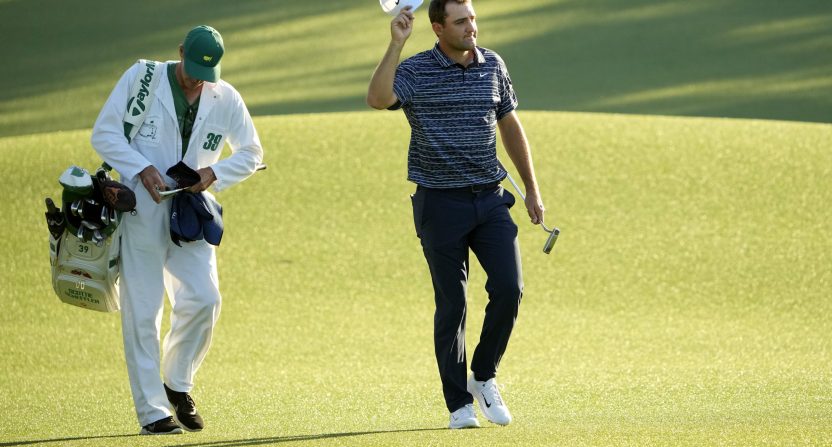 While his three-shot lead coming into the day briefly got trimmed to one, Sunday at The Masters — like the rest of the tournament — belonged to Scottie Scheffler.

He fought off an early push from Cameron Smith and a late surge from Rory McIlroy. The 18th green was a struggle for Scheffler, who four-putted for double bogey. Fortunately for Scheffler, the first 71 holes of the tournament gave him plenty of shots to work with on the last hole. Even with the double, he still finished at 10-under to win comfortably by three shots.

It wasn’t the most suspenseful of Masters tournaments. Scheffler’s steady play essentially turned Sunday’s second nine into an extended — and well-earned — victory lap.

Many Masters viewers took to Twitter to congratulate the 2022 Masters champion.

A year ago Scottie Scheffler was a little known golfer ranked 22nd in the world. At The Ryder Cup he absolutely dusted then #1 in the world Jon Rahm in singles and now IS #1 in the world and on an all time heater having won 4 of his last 6 starts, including his 1st Major pic.twitter.com/pHd7eiVKnA

A true master class from Scottie on how to play ANGC. What a rocket ship ride to no. 1 in the World, and now a Masters to solidify his spot as one of the best on the planet. He’s a good kid and a hell of a player. Well deserved, my man! #TheMasters

I’ve watched Scottie Scheffler for three nights in a row. Probably the calmest golfer I’ve ever seen. It’s been a masterclass from him and fully deserving of being Masters Champion and No. 1 in the World.
As good as Rory’s round was he never really looked in trouble#TheMasters

You just know Scottie is gonna get the boring label because of you know, his face, but that shot at 15 was absurd considering where he stands. Almost totally unnecessary, his non-favorite shot shape and just hit it anyways.

What Scottie Scheffler is doing right now is historic stuff. Four wins in two months including a major and a WGC is mind blowing given the quality of modern fields.

I could see Scheffler winning multiple majors this year. Reminds me of Brooks during his prime

With this victory, Scottie Scheffler will eclipse the $10 million mark in on-course earnings in 13 starts this season.

Scheffler had previously won the WM Phoenix Open, Arnold Palmer Invitational and WGC-Dell Technologies Match Play. His win at the Match Play moved him to the No. 1 ranking in the world.

In addition to his fourth win of the season (and career), it was Scheffler’s first Masters win as well as his first major win.

The next major, the PGA Championship will be contested from May 19-22 at Southern Hills in Oklahoma.