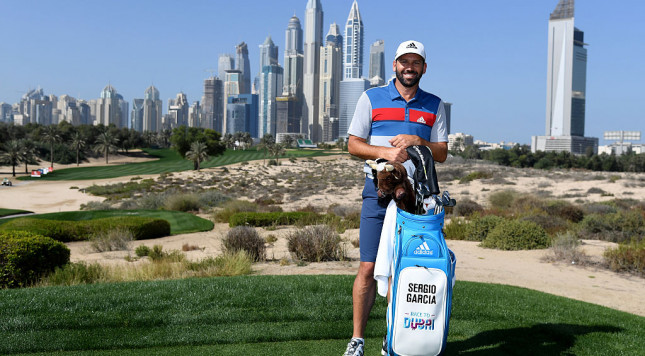 Sergio Garcia is a 37-year-old professional golfer who has won nine PGA events over his career dating back to 1999. An established golfer like Garcia likely sticks with a single caddie who knows his strengths and weaknesses.

However, in September of 2017 during the pro-am of the British Masters, Garcia will have a new caddie walking with him and helping him pick his clubs.

There is absolutely no reason why you’d recognize his name. Johnson isn’t some famous golfer or celebrity or former athlete. Instead, he’s just a regular guy on Twitter with 207 followers as of 12:00 pm EST on January 31st, 2017.

Oh, he’s also an irregular Twitter user in that he tweeted at Garcia 206 times about wanting to be the 37-year-old’s caddie before Garcia finally caved.

“I noticed him the first time from the first tweet he posted at me,” Garcia told ESPN Tuesday at Emirates Golf Club, where he is playing in this week’s Omega Dubai Desert Classic. “I thought it was quite funny and it was very sincere, and obviously I was wondering how long it was going to keep going.

“Angela [Garcia’s fiancée] and I, we kind of talked about it, and I said, ‘Well, how long should we make him wait?’ And we decided that probably 200 days, if he held it for 200 days, it would probably make the cut.”

Ok @markjohno6969 I think I found the perfect day for you to get a taste of carrying my bag & make your dream come true! Are you ready?

I guess there will be no more daily tweets….many thankyou's @TheSergioGarcia for making my dream come true I am feeling very lucky!

The story is crazy and shows off the power of Twitter and what it can do for someone.

“He showed a lot of perseverance and a lot of strength and energy and stuff throughout it,” Garcia said. “Some of the tweets he posted at me were quite funny. I’m sure it will be a great experience for him and also for us. Get to know one of the fans, and it should be good fun.”

By the way, the process of trying to get Garcia’s attention started back in July with this one simple tweet:

A seemingly meaningless tweet eventually blossomed into a real opportunity for Johnson. What a time to be alive.

Here are some of Johnson’s other tweets to Garcia since his first.

@TheSergioGarcia I'm 40 next month what a present to know you'd make my dream come true sometime in the future! #Letmecaddieforyou #Day57

@TheSergioGarcia My Little boy 10 years ago first word he ever said was "Golf" #Letmecaddieforyou #Day118 pic.twitter.com/mJsaHprdJV

@TheSergioGarcia @TheAngelaAkins
Have a great weekend!
what ever you are doing let Sergio pay! #Letmecaddieforyou #Day119

@TheAngelaAkins Happy Monday have a Great week! Put a word in for me!

@TheSergioGarcia Last game of Golf before Xmas lets hope for a good one! #Letmecaddieforyou #Day141 pic.twitter.com/OydOfOue2h

@TheSergioGarcia Happy New Year Bud This is the year you win a major trust me! Playing in Texas scramble with my son today

@TheSergioGarcia Day196 & don't seem to be getting anywhere don't forget Sergio it's my dream! #Letmecaddieforyou

@TheSergioGarcia My two little boys are right I shouldn't give up on my dream! #Letmecaddieforyou #Day202

Honestly, if I had heard about this months ago, I would’ve guessed Sergio might have asked for a restraining order before asking Johnson to actually caddie for him.