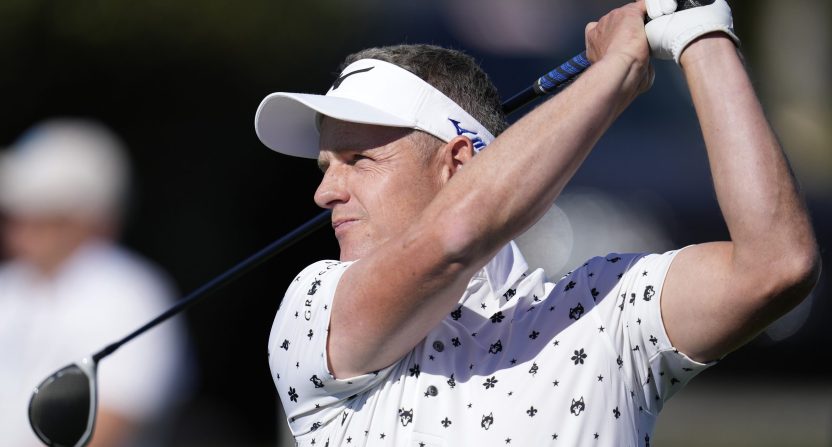 Who will be the next captain of the next European Ryder Cup team? It’s presently unannounced, though according to a report, Luke Donald is the favorite. And while Donald’s Ryder Cup resume is impressive, it alone isn’t necessarily why he’s expected to lead the European team when the biennial event heads to Italy in 2023.

Doug Ferguson of the Golf Channel reported that Lee Westwood had long been expected to get this captaincy. But with Westwood potentially looking to be a member of the Super Golf League (FKA, the Saudi Golf League), the expectation is now that Donald is the most likely captain.

And shifting away from Westwood due to the SGL isn’t just a conspiracy theory or even a well-substantiated rumor. Donald himself has acknowledged the connection.

“I guess we should probably thank Saudi Arabia for that, maybe,” Donald said, about being the expected next captain, per Ferguson.

“It looked like everyone thought Westwood was going to be the next captain – he’s certainly next in line, I would have thought – but he obviously feels he is playing well enough to make a team or he’s looking at something else,” Donald said. “He said he signed an NDA, didn’t he? So, I guess he’s talking to the Saudis, and that’s obviously a no-go for the European Tour or PGA Tour…I guess I’m next in line, or a candidate.”

Westwood is not the only player whose potential Ryder Cup captaincy could be altered because of the SGL. American Phil Mickelson has a list of grievances with the PGA Tour and has considered joining the SGL. But it’s been made clear to Mickelson that if he does do that, he’ll be barred from future PGA Tour events. That includes being a Ryder Cup captain.

Donald has seven wins on the European Tour and five on the PGA Tour (with his 2011 WGC-Accenture Match Play Championship counting for both) and was at one point the No. 1 ranked player in the world.

So it’s not as though Donald is an undeserving captain. Far from it. But Westwood is three years older than Donald. And as vast as Donald’s Ryder Cup experience is, it doesn’t measure up to Westwood’s. Westwood has played in the event 11 ties, tying Nick Faldo for the most ever for a European player. Mickelson is the only player from either side to play in the event more.

For decades, being in the Ryder Cup has been something that both American and European players have loved being a part of. Even golfers like Rory McIlroy, who downplayed the event’s significance, have walked those comments back and completely embraced the event. Being a captain is something that golfers strive for.

Donald should be a Ryder Cup captain someday, as should Zach Johnson, who Adam Schupak of Golfweek reported in September is “the leading candidate to lead the U.S. side in 2023.” But before Westwood and Mickelson? Hopefully, the European and PGA Tour will see two of the most prolific Ryder Cup players ever willing to forego potential captaincies as a wake-up call. With that, maybe improved relations with their players will come.