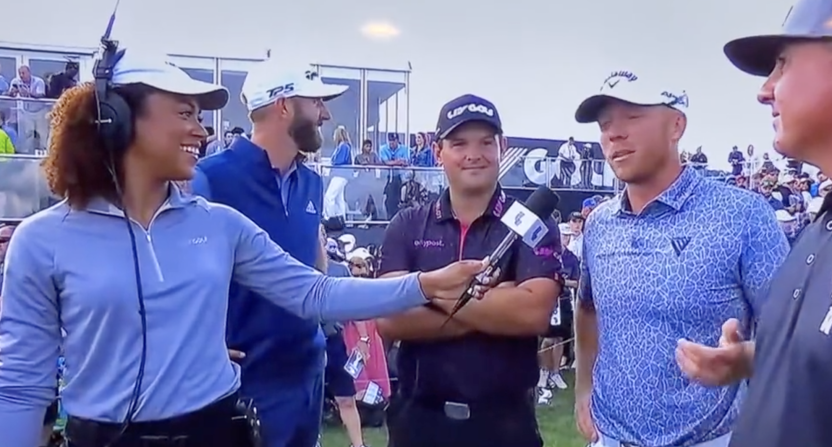 There are a lot of things people can say, and have said, about the LIV Golf Invitational Series. Whatever you think of the Saudi-backed golf league, one thing’s for sure and that’s that the environment around their events is nowhere near the excitement of a Ryder Cup or a Presidents Cup. But don’t tell that to Talor Gooch.

During this weekend’s 54-hole, no-cut tournament at Pumpkin Ridge Golf Club in Oregon, Gooch was asked about the experience and gave an answer that even fellow LIV Golf players Patrick Reed and Dustin Johnson couldn’t keep a straight face over.

“I haven’t played a Ryder Cup or Presidents Cup, but I can’t imagine there’s a whole hell of a lot of difference,” Gooch said. “This was as cool as it gets. We’ve been saying it all week. The energy is just different, it’s awesome.”

He actually said it! pic.twitter.com/jtWSNj9B9m

That’s some professional wrestling-level hype right there. And judging by Reed and Johnson’s reactions, even they couldn’t get on board with that sentiment.

Justin Thomas, who hasn’t minced words about LIV Golf recently, couldn’t help but have some fun with the quote as well.

“I’ve seen some funny stuff online, but this is one of the better ones,” wrote Thomas.

And he wasn’t along, as plenty of people across the golf world chimed in to trash Gooch over his wild comparison.

I’ve never flown private before, but this Spirit Airlines coach middle seat can’t be too much different! https://t.co/Rd5Pn3NiyZ

LIV may overcome the Saudis, Greg Norman and the lack of a major deal only to be undone by the things their players say into microphones. https://t.co/SFRnH8utUd

“I’ve never won a Masters but putting on this blazer must be what that feeling is like.” https://t.co/UnjVXSKXc8

It remains to be seen if LIV Golf players will be allowed to play in the next event Ryder Cup, but given that Gooch is currently ranked No. 38 in the Official World Golf Rankings, he’s probably going to have to keep imagining he knows what it feels like no matter what.