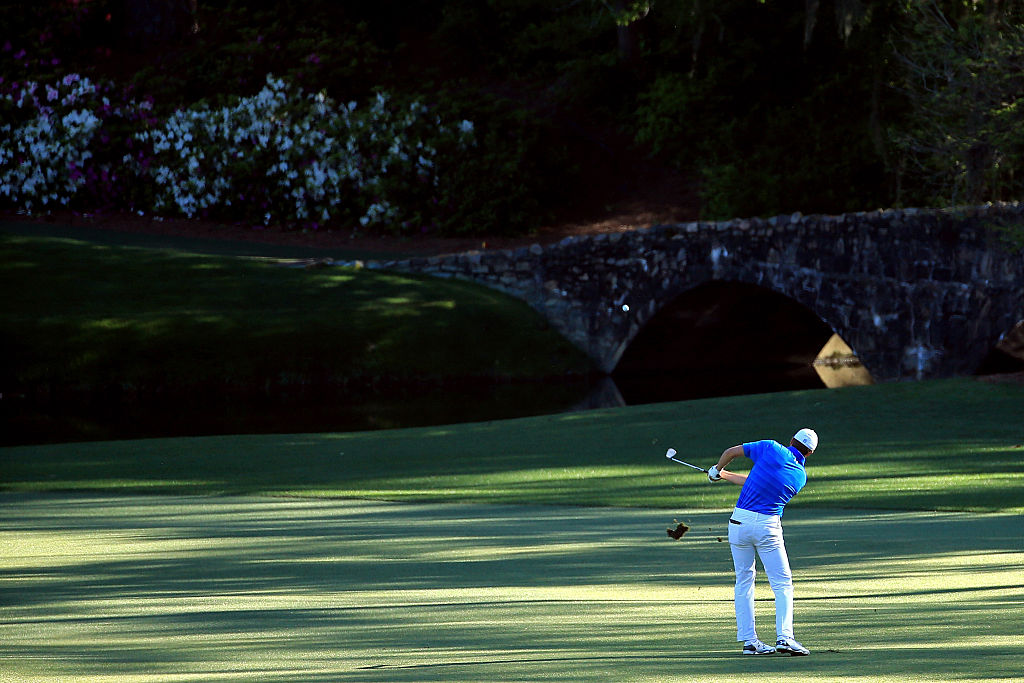 There’s an old saying that goes something like “the toughest six inches on any golf course are between the ears.” Although the phrase has been attributed in some form to Masters founder and golfing legend Bobby Jones, it’s one that seems to be amalgamated from different sources over the years.

It has perhaps never been more true, though, than at the 2016 Masters Tournament at Augusta, a tournament that saw the stunning and shocking collapse of defending champion Jordan Spieth at Amen Corner. In less than an hour during Sunday’s final round, Spieth turned a five-shot lead into a four-shot deficit to eventual champion Danny Willett.

The defining moment of Spieth’s collapse came on the 12th hole, where he made a quadruple bogey 7 on the famous Par 3. After his tee shot finished in Rae’s Creek, Spieth could have still easily made a 4 or a 5. Sure, those scores wouldn’t be ideal when trying to win The Masters, but it still would have left him with a great chance at winning with two Par 5’s and multiple birdie opportunities to come.

Alas, we all know what happened instead…

How, though?  How could that happen?  How could one of the best players in the world do… that?

Spieth is known for his great wedge play and short game. Just the hole prior on 11, he stuck a wedge over water to just a few feet before being unable to convert the par save. But this was a fat chunk straight out of a Saturday morning foursome at your local muni track. This was a duff that barely made the creek, let alone threaten the putting surface.

Even at 22 years old, Spieth has probably hit thousands upon thousands of wedge shots just like the one he dumped in the creek without a problem. And yet, there’s something about the pressure of trying to win a major and the way the mind plays tricks on you that turns the routine into the impossible.

That’s the beauty and the brutality of golf. It is a sport of supreme precision and focus and steadiness. A sport of constant repetition. A sport where you can program your mind and your body to act as one, so that you can keep your wits and your motor skills about you under the most intense circumstances.

And it is a sport where all of that preparation and expertise can come apart in a flash.

Just ask Ernie Els. Els, a four-time major winner, suffered his own collapse on the first hole of the tournament. Els recorded a 9 on his first hole and needed six putts to get it in the hole from just a couple feet.

Els is one of the finest players of this era. On the practice green, he makes that putt 99 times out of 100. At the very worst, he misses and two putts. But six putts? The reason why they have stroke limits at miniature golf courses is to save you from that kind of embarrassment. And as Els said afterwards, there’s no explanation for it when a golfer gets the “yips” and completely loses it.

“It’s what happens when you have the heebie-jeebies. I can’t explain it. You can’t explain it, if you can’t feel it you wouldn’t know what I’m feeling. It’s just one of those things I have to deal with.”

Asked how he could fix it? Els said he needed a brain transplant.

There’s something about golf that makes it unlike any other sport because of the way that the all-time greats can be brought to their knees in an instant. There’s no defense here that can bail you out after an interception or a turnover. There’s no teammate to pass the ball to with the final buzzer approaching. There’s not even an opponent across the net or the ring to compare yourself against. It’s just you, a ball, and a hole in the ground.

And those six inches between your ears.

It’s that mental battle that makes golf such a wonderful, miserable sport. If you’ve ever played it competitively at any level, you know that the challenge of conquering those six inches can lead to your greatest victory or greatest disappointment. That’s what made Danny Willett’s ice-cold 67 all the more impressive. He must have been flabbergasted to see his name at the top of the leaderboard after Spieth’s quad, but still found a way to hold his nerve under pressure.

Major championship golf has been littered with names that have not. Names like Ed Sneed, Scott Hoch, Kenny Perry, Doug Sanders, and perhaps most infamously, Jean Van de Velde.

Truth be told though, there are tons of stories throughout the history of sports of upstarts and underdogs who couldn’t quite close the deal when the moment became too much for them. What separates golf is that nobody, even the best to ever take the course, is immune to losing to their inner doubts and demons from time to time. Nobody in golf is ever undefeated. Spieth included, as we saw on Sunday.

Arnold Palmer famously blew a 7-shot lead during the final round of the 1966 US Open. Adam Scott bogeyed the final four holes of the 2012 British Open. And we all know what happened to Greg Norman at the 1996 Masters.

Then there’s Sam Snead, who won seven majors and a record 82 PGA Tour victories. The one tournament that escaped Snead’s grasp was the U.S. Open and he came painfully close, only to become undone on the last hole.  In 1939, all Snead needed on the final hole was a par to win. He thought he needed birdie, went for broke, and carded a triple bogey. In 1947, Snead missed a three-footer in a playoff to lose to Lew Worsham.

The only feeling that might compare to what Snead and Spieth and all those that came before them might have experienced in team sports is the field goal kicker who misses a chip shot to win the game. Or the basketball player who misses a game-winning free throw attempt in the final seconds.

Those are the exceptions to the rule, though. In golf, you are designed to be put on an island. And it can be a very lonely place. Because on that island, you are faced with the most difficult opponent of all: yourself. And as this week’s Masters showed, that is the hardest person to try and defeat.