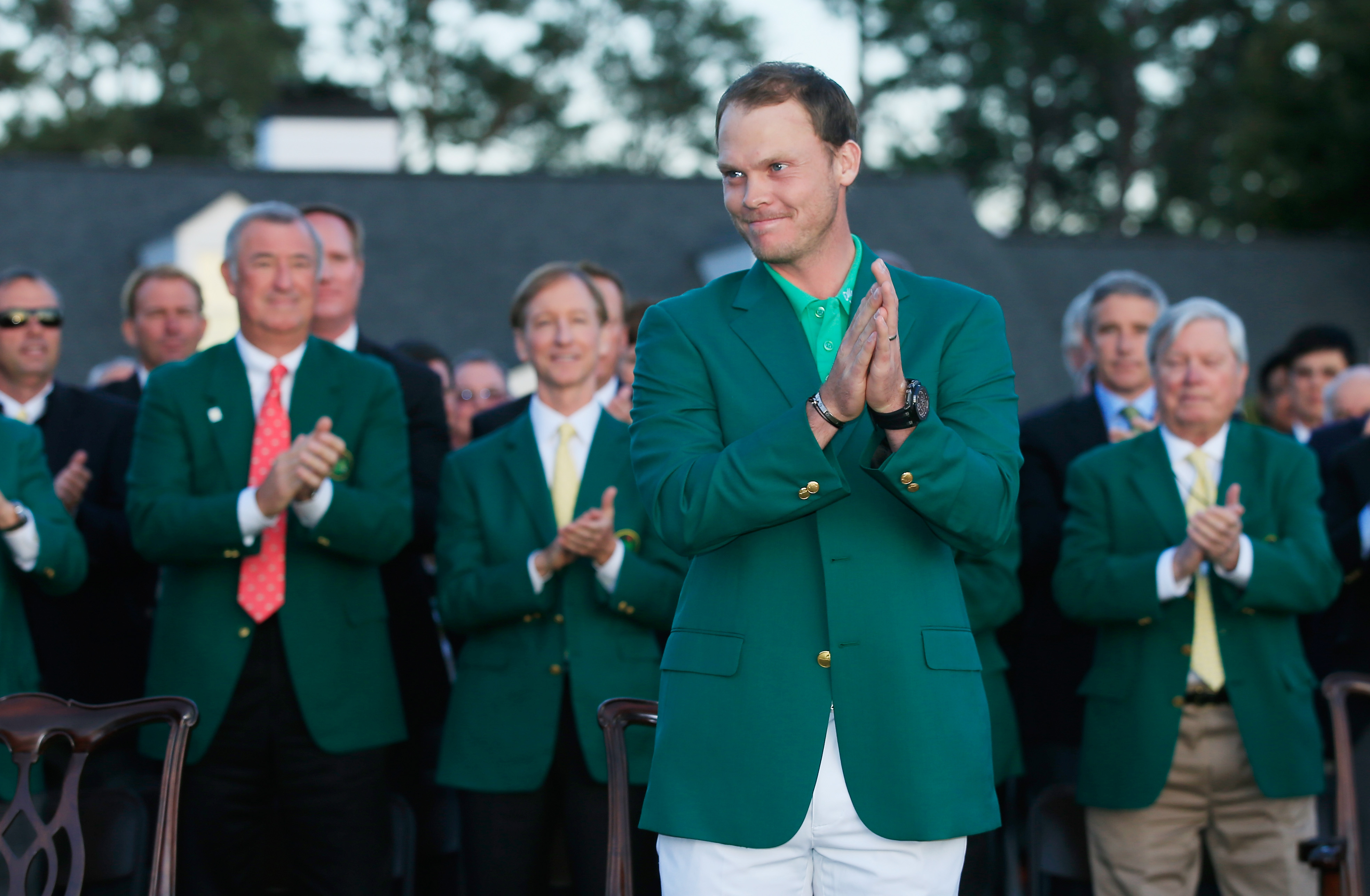 All four majors saw first-time winners this season. None of the majors saw Tiger Woods play in them. And none of them saw any of golf’s new “big three” emerge victorious. However, all of them saw some kind of drama. Here’s our year-in-review from golf’s majors (sorry, Rio Olympics). Naturally, there are 18 awards to dish out…

Ask any golf fan what the defining moment of this year’s majors would be and it’s without a shadow of a doubt Jordan Spieth’s incomprehensible choke during the final round of The Masters.

Spieth was well on his way to a second-consecutive green jacket. As he stepped to the tee at the famous Par 3 12th hole, he held onto a comfortable lead as he was cruising towards victory. Inexplicably, Spieth chunked two balls into Rae’s Creek and never recovered.

It was a shocking reminder of just how beautiful and brutal the sport of golf can be.

Speaking of brutality, there’s maybe no more bizarre sight in all of sports than seeing a former major champion six-putt from just a couple feet away. Nevertheless, that’s what Ernie Els did at the first hole of this year’s Masters. And that, friends, is why most mini-golf places have a six-stroke limit.

Robert Streb, Phil Mickelson, and Henrik Stenson all shot 63 during this year’s majors, tying the all-time record. And yet, only Stenson did it in the final round on his way to victory, finally relieving golf fans of being constantly reminded by Johnny Miller that Johnny Miller had been the only golfer to do it.

Stenson’s 63 came in what was one of golf’s greatest duels. In the final round of this year’s British Open at Troon, Stenson’s 63 beat out Phil Mickelson’s final round 65 in one of the most thrilling rounds in major championship history. It was such great golf that even Jack Nicklaus said that it surpassed his famous British Open duel with Tom Watson.

5) Worst Round – Smylie Kaufman, Final Round, The Masters

It’s always awkward when someone playing in the final group in the final round of a major disappears from the television broadcast because there’s always that moment at the end when the announcers have to politely inform the audience that the golfer is still alive and didn’t enter into witness protection. That’s exactly what happened to Smylie Kaufman during the final round of this year’s Masters when he carded an 81 in the final group with Jordan Spieth. At least Spieth’s collapse made it easy to forget as nobody in that group went home smil… *does everything possible not to make a horrible “Smylie” pun*

As stated above, all of the golfers who won majors this year were first-time winners. That’s both good and bad for the game. Golf is at its best on the American sports stage when it has big-name dominant players to build around (see Woods, Tiger) and ideally some popular challengers (see Mickelson, Phil). We all know Tiger’s not coming through that door anymore, but it’d be nice if the likes of Day, McIlroy, Spieth, etc. could string together 5-7 majors in a short span to climb up those all-time lists and become crossover stars.

Realistically, that may be tougher than ever with so many great golfers coming through the ranks. Even though Willett, Johnson, Stenson, and Walker had never won majors before, they are all hugely talented, ranking No. 9, No. 2, No. 5, and No. 15 in the world respectively. Can one of those players follow-up with more major wins next year or will we see parity continue to rule the day?

The biggest fiasco by far was the USGA’s ridiculous delay in making a decision about Dustin Johnson’s penalty during the final round of the US Open. The USGA may be the luckiest entity in sports this year because an undeterred Johnson went on to win the tournament by a three stroke margin. Had Johnson been forced into a playoff, or lost, there would have been a firestorm like the sport has never seen.

Not only was the USGA’s decision wrong, their methodology of not immediately informing Johnson was a horrible competitive disadvantage to everyone involved. Could you imagine an NBA or an NFL referee saying there “might” be a penalty flag or a foul on a given play?!? The USGA was pilloried by golfers everywhere, with Justin Thomas making the best quip. It was a total embarrassment.

If there could be a surprise winner in the bunch of Top 15 players who broke through on the major scene, it might be Walker. The Texan had more missed cuts (5) than Top 10 finishes (3) coming into the tournament and his last win came at last year’s Texas Open. Walker held his nerve during the final round, shooting a bogey-free 67 including a dramatic hole-out from the bunker on the 11th hole at the PGA Championship.

And yet, there were a couple nervy moments on the last hole. After Jason Day’s heroic eagle, Walker shockingly went for the 18th green in two, hitting into the thick rough short of the greenside bunker. After some deep breaths, Walker did just enough to get his par and win by a stroke.

As for Day, his second place finish at the PGA finished a major campaign where he had three Top 10 finishes (T10 Masters, T8 US Open) and a T22 at the British Open. Combined with wins at the Match Play and Players Championship, Day is firmly entrenched as the No. 1 player in the world.

Long thought to be golf’s next superstar, Fowler was a non-entity on the major scene in 2016. The seventh ranked player in the world registered two missed cuts at the Masters and U.S. Open, followed up by a T46 at the British Open and T33 at the PGA Championship. Two years ago, Fowler finished in the Top 5 in all four majors.

It may not have been a shot that will go down in golfing lore, but the sweetest moment of the major championships was Dustin Johnson sticking it at the 72nd hole of the U.S. Open. A year prior, Johnson was three-putting his way to one of the most agonizing losses in the history of the tournament. But in 2016, Johnson got it right and put his major championship demons to bed.

Of course, when it comes to DJ, you always take the good with the bad…

WATCH OUT FOR THAT GORSE!!! 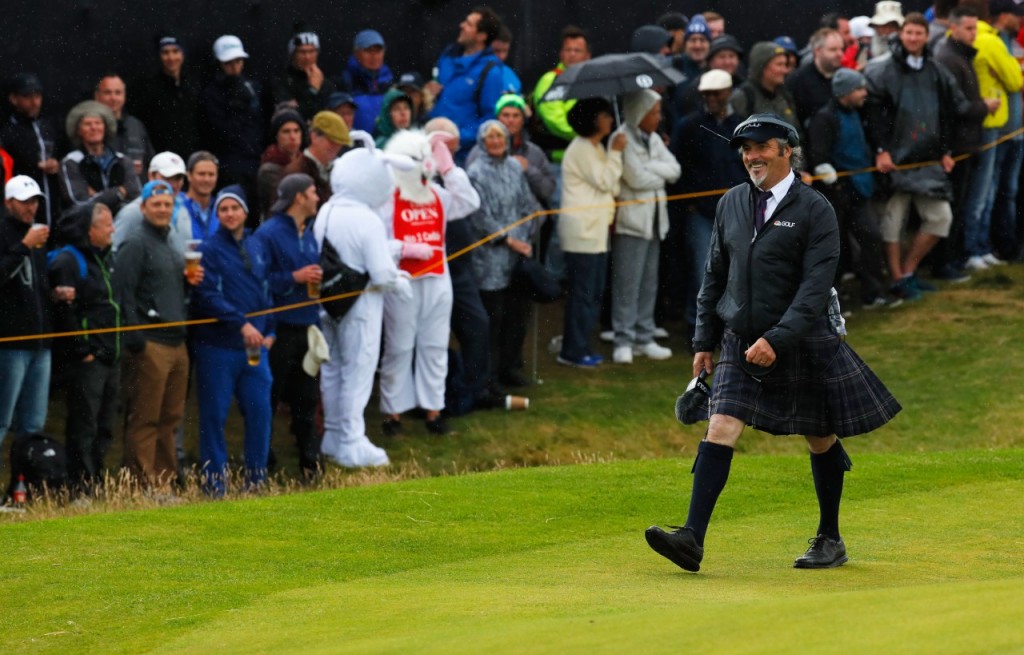 With someone who writes for Awful Announcing, you’ll have to excuse one broadcast-related note. NBC took the rights for the British Open this year and got to debut former ESPNer Mike Tirico as host and former CBSer David Feherty as on-course reporter during the tournament. The pair fit seamlessly into NBC’s lineup and made one of the best broadcast teams in sports even better. One wonders how long it’ll be until Feherty replaces Johnny Miller in the 18th tower.

15) Player We Missed The Most – Tiger Woods

At the beginning of 2016, there was some hope that the game’s seminal figure would be making a comeback at some point during the upcoming season. Maybe at Augusta, hopefully at the U.S. Open, and definitely by the summer at the latest. And yet, here we are at the beginning of August and we still have no idea when (or, gulp, if) we will see Tiger compete again. Woods hasn’t played the weekend in a major since the 2015 Masters. It would have been amazing to see a wily veteran Tiger use all of his skill and experience to battle young guns like Day, Spieth, and McIlroy so we could have a true passing-of-the-torch moment. We may never get that moment, though. Forget talking about golf in the post-Tiger era, we’re already there.

The Englishman (whose actual name is Andrew) has quickly turned into one of the great characters of the game. Earlier this year, he promised to “get hammered” after winning his first European Tour event. Then he teed off a hamburger. Then he got an endorsement deal from Arby’s. And he can golf his ball a little bit as well – Johnston made the cut in all three majors he played this year.

This is a transitional era for the game of golf. More stars than ever before are capable of winning the game’s biggest tournaments. In 2016, we saw four majors with four distinctly different storylines. At Augusta, Danny Willett staked his claim for being one of golf’s top young players after Jordan Spieth’s collapse. At the U.S. Open, Dustin Johnson finally got rid of the “best player to never win a major tag” and overcame his own personal ghosts as well as the USGA. At Troon, Henrik Stenson achieved the missing piece to what has been a quietly fantastic career after an incredible battle with Phil Mickelson. And at Baltusrol, Jimmy Walker picked up a defining victory of his own holding off the world’s best player.

It may not have been a year that set record ratings or viewership, but it was a year that showed the game of golf is perhaps deeper and better than ever before.