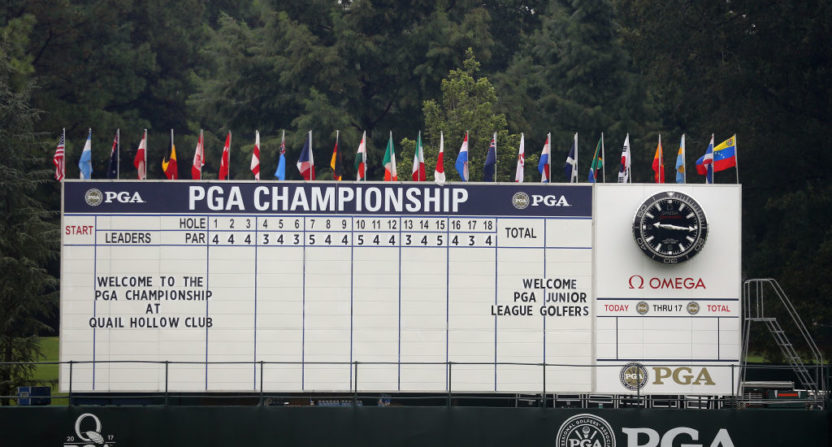 The PGA Tour is making some big changes starting in 2019, so don’t worry you have time to prepare.

The first of the major changes is that the PGA Championship will be moved back to May for the first time in 70 years. The 2017 PGA Championship is this weekend and has been in August in recent years. In 2019, it’ll be a whole three months earlier when it returns to Bethpage Black in New York.

According to The Associated Press, another big change is The Players Championship moving back to March. That’s two months earlier than the 2017 date when it was played May 11th-14th.

There are two big reasons why these changes are being made down the road: the NFL and the Olympics.

Let’s start off with the NFL. The PGA has reportedly decided it wants to finish the FedEx Cup before the NFL season is in full swing, which makes sense. In doing so, the PGA could get better ratings for the final days of tournaments because they will no longer coincide and go up against NFL games.

While the NFL is a big reason why the PGA is making these changes, another major reason behind the change is the Olympics. Back in 2016, at the Summer Olympics in Rio de Janeiro, golf returned to the summer games for the first time since 1904. With golf now back in the Olympics, the PGA wants to alter its schedule to make it easier for players to play in the Olympics during the PGA season.

While a couple big changes have emerged such as the new PGA and Players Championship dates, other tournament dates and the schedule as a whole hasn’t been finished. The PGA still plans on finishing around Labor Day, it just remains to be decided what tournaments they’ll finish on and when.

The AP also reported the playoff event in Boston for example could end after 2018. Another change in the fall could be moving the Greenbrier Classic, which is annually played in or around July, to now be played in the fall.

Outside of the changes being made to work around the Olympics and NFL, another big reason behind the change was to make it easier for hot regions and places such as Texas and Florida to host tournaments. By moving the PGA Championship to May, hotter states could host the tournament before it gets too hot.

On the other hand, this makes it harder for states like Wisconsin and Minnesota to host the event due to possible poor late spring weather.

At the end of the day a lot of these changes are still being worked out and since nothing is official, a lot could still change.