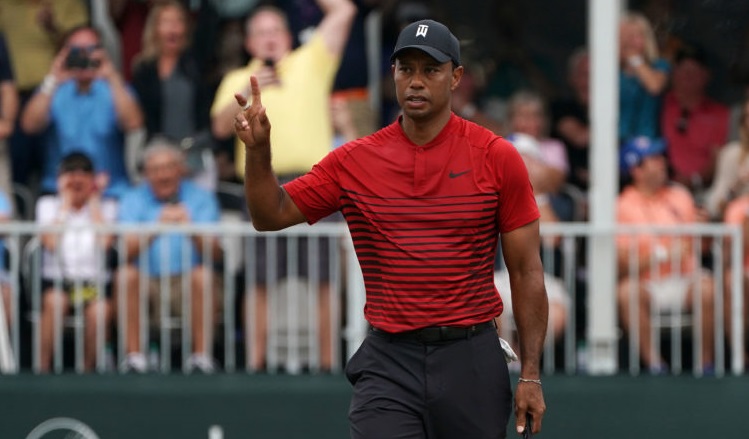 Tiger Woods had spinal fusion surgery less than a year ago. It’s perhaps the most self-explanatory of surgeries; his spine was fused together in places to help stabilize his back.

The golf swing is an unnatural motion, especially when performed with the ferocity (and as often) as professional players do it. Even on that spectrum, Tiger existed on the edge; his approach to golf (and to his oddly over-the-top training regimen) caused his body to break down to begin with. Regardless of what happened off the course, that’s been Tiger’s biggest obstacle to a potential return.

A few weeks ago, Tiger looked pretty good. Not great, but solid. He overshadowed the event, which was an odd thing to watch, but it was still good to have him back.

This week, though, at Tampa’s Valspar Championship, Tiger Woods found a semblance of “Tiger Woods”, and it was a hell of a lot of fun. (And also a ratings boon.) Woods entered Sunday just a shot off the lead, and after one hole he held a share of the lead at -9. From there, though, things didn’t quite work out; he hit the ball fairly well, reaching 14 greens in regulation, but was never close enough to the hole to really give himself a lot of looks at birdie.

After that opening birdie, Woods bogeyed the fourth hole, and then made twelve consecutive pars, a stretch that included missing from inside 10 feet for birdie on the relatively easy par 5 14th.

The other Sunday leaders weren’t doing much, though; Justin Rose shot a one-over 72, while Brandt Snedeker and Corey Conners shot 78 and 77, respectively, to eject themselves from contention. But Paul Casey, playing well ahead of Tiger, fired a round of 65 to take the clubhouse lead at -10, and that meant that when Tiger, at -8, stood over this 44-foot birdie putt on 17, he knew he had to make it.

That wasn’t just Tiger Woods pouring that in. That was “Tiger Woods”, and it’s nice to see those two things come back together again. It was honestly looking like it might never happen, and while now we’re left to wonder if Tiger’s back can hold up going forward, one thing is obvious: if it does hold up, he’s going to win. Soon, and likely often.

Maybe even this week; Woods makes a return to the Arnold Palmer Invitational at Bay Hill, a tournament he hasn’t played since 2013 for a variety of reasons. The last time he was there, in 2013? He won.

And he won the year before, too.