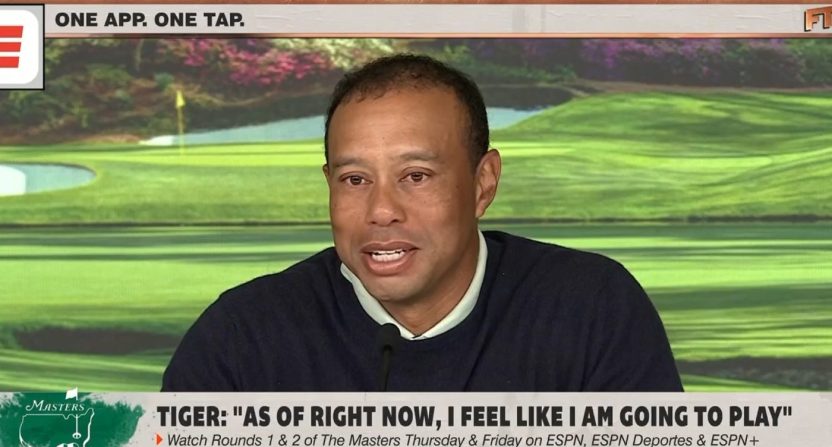 One year after his horrific car crash and less than two months after stating he’s “still working on walking,” Tiger Woods is gearing up to play in the Masters this week.

The five-time Masters champion spoke to reporters Tuesday morning and stated he expects to tee it up in Augusta this Thursday. If Woods does play in the Masters, it will be his first official event since nearly losing his right leg in a car crash that occurred Feb. 23, 2021. Woods was able to compete with his son in a 36-hold scramble event last December, but required the assistance of a golf cart which will not be available to him in Augusta.

“As of right now, I feel like I am going to play,” Woods told reporters Tuesday.

Tiger: "I feel like I am going to play" pic.twitter.com/5jjNub8EjW

Woods arrived in Augusta last week, where he began playing practice rounds to test his body and see if he’s up to the physical challenge of working the course for four consecutive rounds. On Sunday, Woods tweeted that he would be a game-time decision, but after more practice rounds, he now believes his body is up to the challenge of competing at the Masters.

“I’ve worked hard to get to this point to test it out and see if I can do this,” Woods added.

While most people believe just teeing it up on Thursday will be a win for Woods considering the recovery process he’s endured over the last 13 months, the iconic golfer believes he can legitimately compete for his sixth green jacket.

Asked by reporters if he thinks he can win the Masters this week, the 46-year-old Woods confidently responded, “I do.”