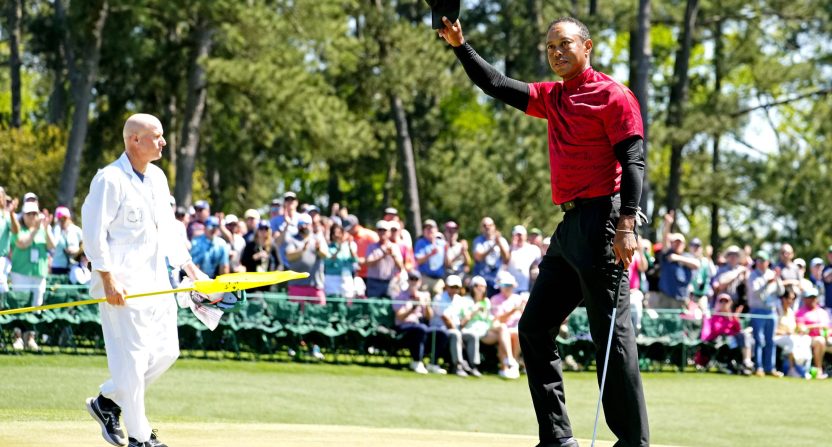 When Tiger Woods made his final putt on the 72nd hole of the 2022 Masters, he wasn’t atop the leaderboard — or even close. He wasn’t even close to being the clubhouse leader. For most of his career, that might have been a frustration for him. But on Sunday, it didn’t matter.

No, what mattered on Sunday wasn’t where he finished — but that he finished.

A standing ovation for Tiger Woods as he finishes his final round 👏#themasters pic.twitter.com/1SXCxW54bj

After starting the tournament well, Tiger finished with rounds of 78 on Saturday and Sunday. He was also walking at times with a noticeable limp.

But in his postround interview, Woods — wearing his traditional Sunday red — was upbeat about his week. He knew that there was work to be done but was also happy to be back out there.

He was not alone.

Golf fans following along were also thrilled to see Tiger go the distance.

Cool to see Tiger go the distance on that leg. Here’s to hoping this is just the first step in another comeback 🐅

Many years ago, when Tiger told me about the final round of the ‘97 Masters, he said his dad’s message was simple: “Finish the race.”

That smile walking off 18 says that today – he knows he did.

I don't believe Tiger Woods has ever experienced more joy playing golf than he has the last 4 days at the Masters, being cheered on by throngs who love and missed him even more than ever before. He and they know how lucky he was to be limping through the tournament he loves most.

This was really, really cool.

A few months ago, Tiger talked about how much he missed the feeling of crisp golf shots. About how he laid in the grass just to be outside.

Now he's walking off Augusta having completed 72 holes at The Masters. And soaking it up. Very cool. pic.twitter.com/imPEwHo33C

What a tremendous accomplishment from Tiger this week. Blows away anything anyone could’ve expected 12 months ago.

A smiling Tiger after shooting well over par. This week was about finishing and showing himself he could do it. One of the great athletic feats of our time. Thank you Tiger!! #masters2022 pic.twitter.com/3ddXxRD1T3

I’d never thought I’d see Tiger Woods smile so big after shooting +13 at the Masters but man what an accomplishment given what he’s been through.

You can see just how much it means to him to be back out competing. Awesome.

And there’s more to be upbeat about for Tiger. Augusta is one of the longest courses in the world. That, combined with the immensity of the slopes throughout the course, makes it the most difficult course on tour to walk.

Tiger didn’t ease himself back into competition. For all intents and purposes, he threw himself right into the deep end and came out on the other end.