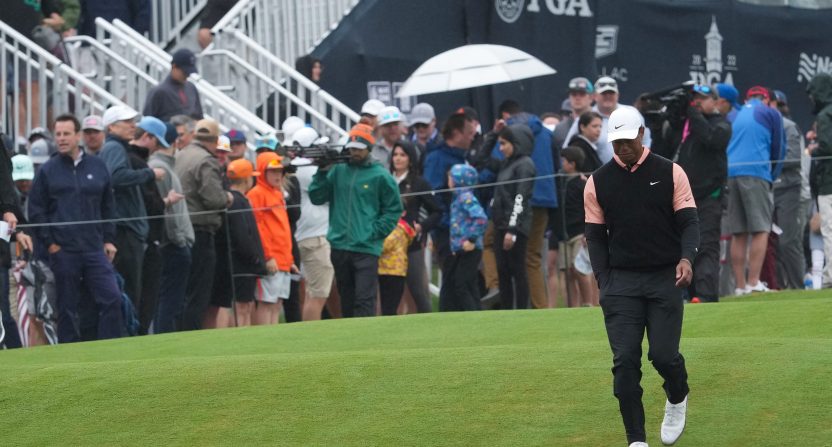 While his first two rounds at the PGA Championship were often a struggle, Tiger Woods did make the cut, giving him a chance to potentially make some noise over the weekend. But on Saturday, those chances came to an end.

Woods struggled mightily. He was already five-over for the round when he got to the ninth hole. Tiger then bogeyed holes No. 9 through 13. If not for a birdie on No. 15, he wouldn’t have broken 80. As it was, his 79 moved Tiger to 12-over for the tournament, which has him in a tie for last place among players who made the cut. Furthermore, when his round was over, Woods — who is still recovering from a January, 2021 car crash — is in a lot of pain and unsure if he’ll be healthy enough to play the final round.

Tiger Woods is undecided on Sunday at Southern Hills. pic.twitter.com/0GtiajcD3B

The feeling of golf fans was generally supportive, though that support manifested itself in different ways.

Watched him play all day today…just didn't look the part. One could sense he was hurting…and him admitting he is sore is just understating how his body must be feeling. Gotta feel for him. https://t.co/x2KQuaf2HK

Wouldn’t be mad or blame him if he WDs 🤷🏻‍♂️ https://t.co/Hn3BHRbjld

Tiger do what’s best for you and your health.. you don’t ever have to prove anything to anyone… you have give us so much over the years… please be safe ! https://t.co/5bQYlV8Rno

Hope he’s able to play. The man is the essence of mental toughness. https://t.co/FuJ0ZYNO4S

He’s playing golf that is the only thing that matters. He’s definitely not playing up to his standards, but he’s playing.

He needs to take the rest of the year off and heal……love the determination, but not at the expense of your body. https://t.co/dywBRAB3Di

The PGA Championship is only Tiger’s second competitive tournament since that car accident. The first was the Masters and while Tiger did make the cut at Augusta, even providing some genuine highlights, that was also a struggle for him. He shot a 78 in both the third and fourth rounds of that tournament and at times, was clearly limping.

Given how hilly Augusta is, just playing 72 holes was a win for Tiger and to an extent, that will be true here, as well. Still, if Tiger is at a point where, after 54 holes, he’s not even sure if he can play the final 18, something isn’t right.

Woods has already committed to the Open Championship at St. Andrews in July. Thanks to his Masters win in 2019, Tiger is qualified for June’s U.S. Open, as well, though has not yet committed to that.

Tiger knows his body better than anyone and we certainly can’t tell him where he should or should not play. But given how much of a struggle it was for him to play four rounds at Augusta and now three rounds at Southern Hills, rest may be the best idea.