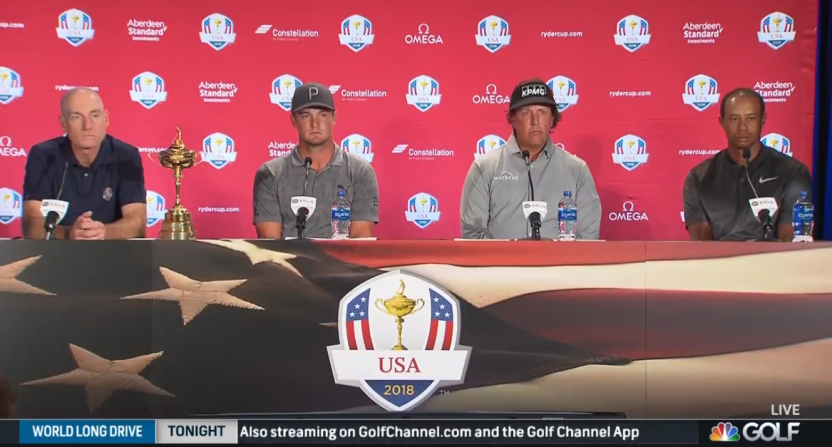 The Ryder Cup returns in less than three weeks, and the United States will be bringing two of the biggest names in the history of the sport along as captain’s picks, while also tabbing the hottest player in golf right now.

USA captain Jim Furyk didn’t waste any time either, announcing the picks right at the top of the presser:

Tiger, Phil, and Bryson were always going to be picked, of course. They finished 9, 10, and 11 on the Ryder Cup points list (the top 8 qualified automatically after the PGA Championship), but moreover, Tiger Woods and Phil Mickelson are, well, Tiger and Phil. Phil will now have played in every Ryder Cup from 1993 onward. Tiger, meanwhile, returns for the first time since 2012, and for only the third time since 2006.

Neither are legacy picks, really, but Tiger’s is much less of one. Over the last few months he’s been one of the best players in golf, and certainly one of the best American players. He lead the Open Championship on Sunday (albeit briefly), and finished solo second to Brooks Koepka at the PGA Championship. Obviously it’s a big deal to have Tiger and Phil in the event, and NBC has to be thrilled about it (Tiger’s possibly the only name that can get casual fans out of bed at 4 AM to watch golf from Europe.)

But the other player picked today is probably the hottest player in the world; Bryson DeChambeau has won the first two FedEx Cup playoff events in a row, and he was a more than logical selection. It was also peak Bryson DeChambeau that he launched into a lengthy Walker Cup ping-pong story, fairly unprompted:

DeChambeau’s, uh, quirky personality might make for some interesting pairings in France, but he’s also pretty clearly one of the more talented players of his generation. The press conference highlight, though, was probably this exchange following a lengthy question about what it means to take down two of a team’s best stars in one match, directed at both Phil and Tiger and referencing their struggles as playing partners in the 2004 edition:

The United States still has one pick to make, which comes next week; it’ll likely be rising star Tony Finau, whose presence would mean the American team had three rookies in Justin Thomas, Finau, and DeChambeau. And then, finally, we can get to the actual golf, which is always the best part.