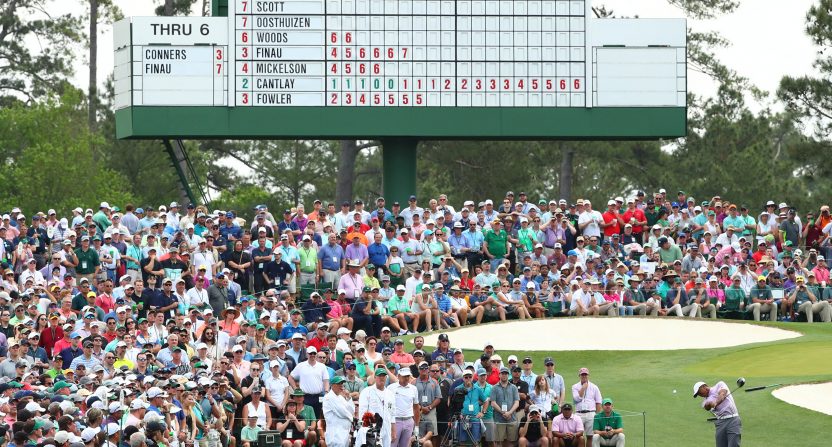 Tiger Woods hasn’t won a major since the 2008 U.S. Open. That’s well-chronicled. And after nearly a decade without relevance, a few years aside, Woods returned to the top of leaderboards last year, finally capturing a win at the Tour Championship.

Before that, though, Woods actually finished second at the PGA Championship, though it was slightly overshadowed by Brooks Koepka winning his second major of 2018. Tiger also had chances at the U.S. Open and at the British Open. Now, after a few ups and downs over the winter, Woods is back in major competition, and he has his best chance to win a major in a very long time.

With storms in the Sunday forecast, the final round will off in threesomes (and begin much earlier, CBS will broadcast starting at 9 AM Eastern), Woods will be in the final group at a major, joined by 2018 British Open champ Francesco Molinari and rising American star Tony Finau, who came up one shy of tying the course record on Saturday with his 64. Woods reeled off three straight birdies on the front nine. Then, playing the par 5 13th, Woods hit an errant drive left into the trees.

That could have been the tournament, with a less fortunate bounce; instead, he ended up just barely into the second cut.

That dude that threw Tiger's ball back into play at the 2000 PGA is apparently camping in the trees on this back nine.

Woods was instead able to lay up, and from there gave himself a very good look at birdie.

And here comes the roar.

Tiger Woods moves into a tie for second place with this birdie on the 13th hole. pic.twitter.com/ukpuCIVO6S

From there, Woods played steady golf, giving himself a great look at 16 as well:

Tiger fires a DART on No. 16. pic.twitter.com/6KECJJFQeG

Which he would convert, briefly tying the lead.

Tiger followed that up with two solid pars, and he’ll start the final round no worse than second.

Tiger Woods walks off of No. 18 at Augusta National tied for second heading into Sunday. pic.twitter.com/j9qWETnlpx

Tiger isn’t known for running players down from behind, although part of that is somewhat unfair; he was so good at his peak that when he was on, no one really had a chance to lead him heading into Sunday. Molinari, though, is a very solid player; along with Koepka, it’s hard to pick someone more likely to contend at majors at this point. He’s not going to give many shots away, which means Tiger will have to make some things happen.

Fortunately, 2019 Tiger seems to have plenty of firepower to make that happen; his driving distance has been very impressive, and when they’ve been wayward, he’s been able to get himself out of trouble thanks to his course knowledge and incredible touch.

The entire leaderboard is quite impressive, though; if Molinari does fall backwards early tomorrow, it could bring plenty of big names into play. Brooks Koepka, for example, sits within striking distance; with more rain in the forecast overnight, there’s a chance he could overpower everyone tomorrow, which would mean holding three of the four majors at once. If Molinari wins, he and Koepka would have split the last four.

Even with those two names at the top of the board, though, it’s clear what the main storyline will be tomorrow morning: Tiger, in position to do what many people thought he’d never do again. That’s definitely worth getting up early to watch.