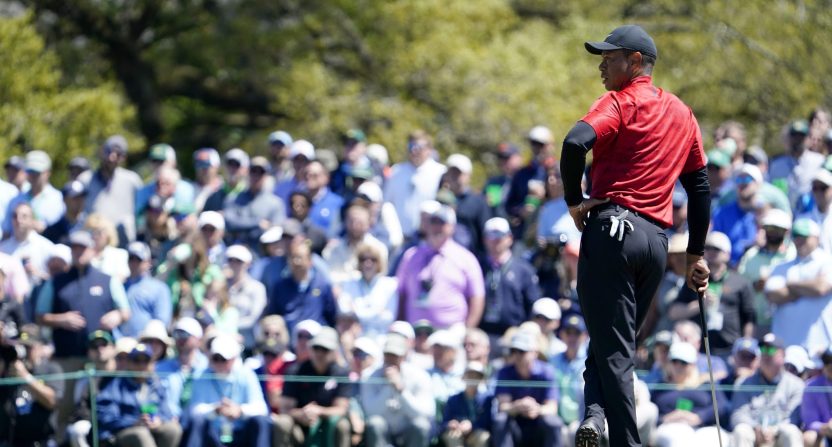 It’s Sunday at the Masters and Tiger Woods is playing, so you know what that means. It’s time for Tiger to break out the classic red shirt that has become his iconic look.

Tiger’s red shirt has become synonymous with him and Masters Tournament victory. The five-time champion has worn it on many occasions where he’s won here and elsewhere.

Tiger made the cut at the 2022 Masters after shooting 1-under on Thursday and 2-over on Friday. Unfortunately, he had a rough Saturday and came into Sunday at 7-over par, well out of range of winning the tournament. Still, it’s a valiant effort and an amazing weekend considering Woods is just a year removed from a car accident in which he almost lost his leg.

Even if he’s out of content, seeing Tiger in red has brought out a lot of reactions from around the golf world.

Tiger Woods, back at the Masters in his Sunday red! pic.twitter.com/MQEKZtqj8h

Sunday red at Augusta. A golf nerd’s dream. I can’t wait to swipe left (or maybe right, you never know) on men wearing mocknecks in their dating profiles, after they were inspired by the GOAT this weekend. Happy Masters Sunday! #Masters2022 #TigerWoods pic.twitter.com/f8M4fWM8Pb

Gorgeous morning at Augusta National for the #Masters as Tiger Woods and Jon Rahm tee off. Coming off his worst round ever in this tournament, the red and black and the huge galleries are BACK for Tiger's final round. #SundayMorning

Tiger Woods is wearing a red mock turtleneck and about tee to off on Sunday here in Augusta again.
Regardless of what happens, it feels good to tweet that. #TheMasters

Enjoy the final round and make sure to step in and watch the guy in Red & Black. Yes he’s out of contention, but he won’t be playing a ton for the rest of his illustrious career. #TigerWoods #Masters

No outfit has ever been better than @TigerWoods RED @nikegolf polo on Sunday’s in the history of sports except Rocky Balboa in the Stars and Stripes shorts. Let’s go Tiger you won on Thursday already in my eyes. ✊🏾🖤

Hopefully, Tiger can get back on track and finish Sunday with a solid score. However, no matter what happens, it’s clear that the golf world is thrilled to have Woods back out on the course.

There’s still a lot of golf to be played but for now, Scottie Scheffler is on pace to win the 2022 Masters. However, Cameron Smith and Sungjae Im are lurking nearby.