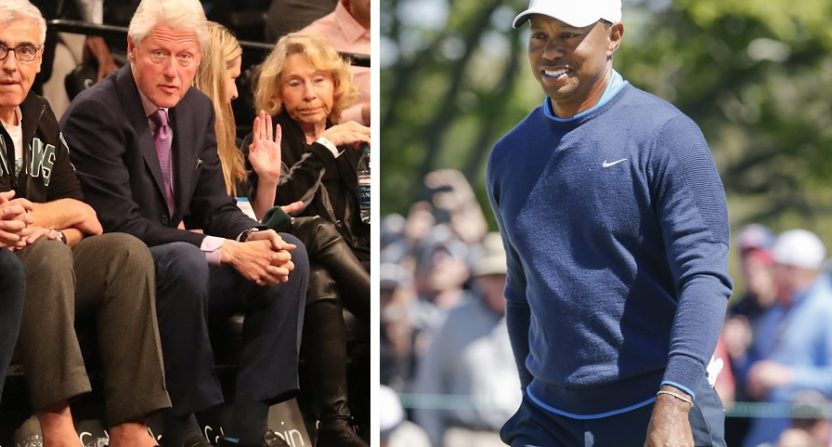 President Bill Clinton and Tiger Woods were two of the most polarizing people of the 1990s, and apparently they don’t exactly get along very well either.

According to an excerpt from Tiger Woods, a new biography about the legendary golfer being released next week, Clinton and Woods got off on the wrong foot way back in 1997, when Woods didn’t attend a ceremony in honoring Jackie Robinson.

Golf Digest has the full excerpt, which relates to Woods’ people reaching out to Clinton’s people about the former president making an appearance at the opening of the Tiger Woods Learning Center near Anaheim.

The story, of course, involved Woods declining to attend a 1997 ceremony honoring the late Jackie Robinson, sparking a schism between Clinton and Woods that was later widened by a subsequent Ryder Cup incident in which Clinton walked into the U.S. team’s locker room only to see Tiger walk out. Later, Woods refused to have his picture taken with Clinton when the victorious American team visited the White House. For these reasons, Tiger was sure Clinton would never go for it. The ex-president, he insisted, hated him. Woods never let a slight go, and he assumed Clinton operated the same way.

However, after much wrangling, the former president’s people came back and said Clinton would be amenable to an appearance under certain conditions: Tiger had to personally call and make the request; as an ice-breaker, Clinton wanted to play a round of golf with Woods in Orange County when he came out for the event; and he needed a private plane to travel to the West Coast.

The round of golf in question didn’t go well (to put it mildly), and included Woods both breaching golf etiquette and being straight up disrespectful.

The situation got even more awkward after Clinton arrived. Tiger’s behavior did nothing to bridge the gap between him and Clinton. At the outset, Clinton started carrying on, monopolizing the conversation, as he was known to do, before Woods interrupted and said, “How do you remember all that shit?” Once they got onto the course, Tiger acted completely indifferent to the entire group, mostly riding alone in his cart and spending an inordinate amount of time on his phone. After finishing a hole, he would routinely exit the green while others were still putting, a major breach of golf etiquette. When the president hit a wayward drive, Woods snickered. He also told a series of off-color jokes.

To top the situation off, Woods forgot to sign a picture for Clinton, and a staffer for the ex-president is still bitter about it.

To make matters worse, about a week later, Clinton’s office sent a picture of Clinton and Woods on the course together and asked Tiger to personalize it and send it back to the president for framing. Whether Tiger forgot or simply ignored the request remains unclear. Many months later, a staffer for Clinton called Tiger’s office in exasperation and asked, essentially, what the f— was going on. At that point, Tiger scribbled his name on the photograph and sent it back. Years later, a longtime Clinton staffer had unpleasant memories of the entire situation. “Clinton hauled his ass out West, and you can’t sign a picture? The whole experience was a lot of ‘I’m Tiger Woods, king of the world, go f—yourself.’ ”

Knowing what we know about Woods, this…well, it sounds about right.

Tiger Woods was written by Jeff Benedict and Armen Keteyian, and will be released on March 27th.