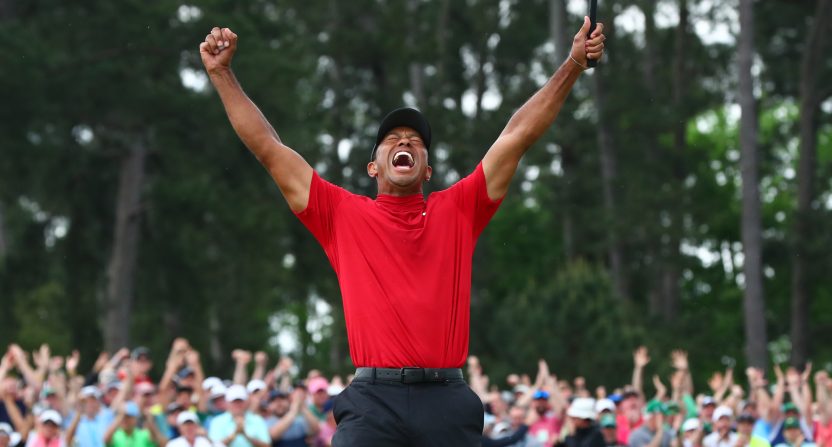 In news that’s been rumored for a while now, Tiger Woods will return to televised golf next weekend at the PNC Championship.

Although it’s been a long and challenging year, I am very excited to close it out by competing in the @PNCchampionship with my son Charlie. I’m playing as a Dad and couldn’t be more excited and proud.

It won’t be at an official PGA Tour event, but it might be an even better return spot for Tiger, as he’ll play the pro-am alongside his son Charlie. The PNC Challenge, formerly the PNC Father-Son (since changed to allow for LPGA stars to play as well) is a low-key return spot for Woods, and that he’s returning to play with his son is more than fitting.

Considering how close Woods was to losing a leg or even his life in his one-car high-speed accident last winter, the fact that he’s even walking again is fairly miraculous, much less swinging a golf club. Tiger mentioned in a recent Golf Digest interview how motivated he was to just be able to spend quality time with his family again, whether that was playing golf or not.

That he feels comfortable enough to play in an event that will be televised less than a year out from that crash is really something, and of course it sets up plenty of speculation as to whether he might be able to return to play the Masters in April or the Open in July. He’ll get scrutiny for how his swing looks; this already happened when he released a video showing his swing at home, and it got gross quickly as every major golf outlet rushed to talk about what sort of changes he’s been forced to make since the crash.

Maybe he will play major championship golf again, maybe he won’t, but in any case, it’s clear that golf hasn’t completely lost the biggest star of the game’s history, and Charlie gets to play with his dad again in a fun event. Focusing on that rather than whether he’ll be able to catch Jack Nicklaus is the healthier choice.